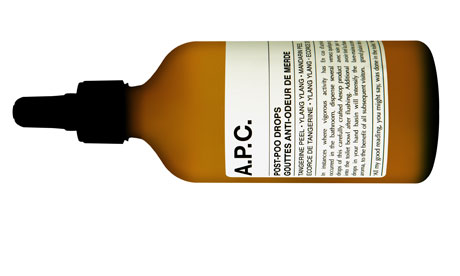 Telling it how it is: Aesop’s Post-Poo Drops

The joy of living with people who stink is that yours is the privilege of choosing a perfume with which to de-stink them. That’s it. That’s the only benefit. Apols if you were expecting a list. First time I saw Aesop’s Post-Poo Drops (21, aesop.com), I won’t lie, I thought it was an April Fool. But it makes perfect sense. I mean, every home fragrance is basically a “post-poo” perfume, isn’t it? Incense, room sprays – they’re all expensive variations on “lighting a match”, but it’s for this that I love them. The classiest modern home fragrances bypass delicate rose scents and really fight the fight, with citric, sour, Haribo-type smells. Ones that don’t pretend to be a vase of elegant flowers – instead proudly stating their aim. We’re here, we’re covering the smell of toilets, get used to it.