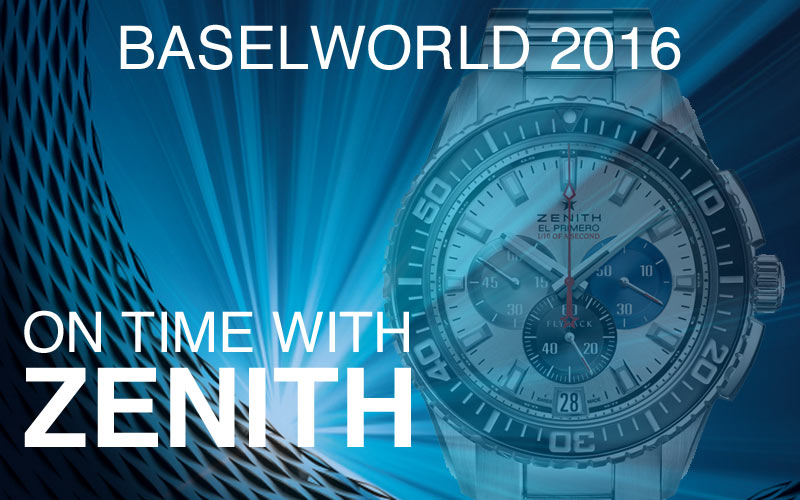 Zenith is one of the leading Watch-makers in Switzerland with a worldwide aura. It was founded in 1865 by visionary 22 years old man, Georges Favre-Jacot in Le Locle (Neuchatel Canton) who dreamed to create the first manufacture capable of making the most reliable and accurate watches ever imagined. Georges Favre-Jacot chose the city of Le Locle to found a manufacture named “Fabrique Billodes.” At this time, large numbers of watchmakers worked at home in various scattered workshops with no direct links to each other. Thus, it was the first to build on the territory of Switzerland spacious and bright buildings dedicated to watchmaking, building on the model of the Waltham Watch Company. He gathered no less than 80 watchmaking professions under one roof combining grand traditions and significantly advanced production technology.
Chronometric performance is a constant throughout Zenith’s history. In 1899 the Favre-Jacot manufacture produced its first pocket chronograph. In 1900 it won a gold medal at the Universal Exhibition in Paris. Indeed, over the course of the 20th century, the company was awarded 1,550 distinctions. It produced some fifty calibres which were sold at the brand’s numerous branches around the world. Between 1910 and 1960, it developed onboard instruments for planes, cars, trucks and even locomotives. Among the many calibres introduced by the firm are Calibre 135, in 1948, and the now legendary El Primero, in 1969, beating at 10 vibrations a second. In 2010 it evolved into the El Primero Striking 10th displaying tenths of a second. In 1911, the manufacture took the name Zenith, after the highest point reached by a celestial body. George Favre-Jacot was quick to give up an activity of simply assembling parts bought-in from outside suppliers, and instead chose to manufacture movements entirely in his own workshops. He also produced his own dials, which were enamelled or painted, as well as cases. A manufacture in the true sense of the word took shape, with all the watchmaking professions together under one roof.

In 1999 Zenith became part of the LVMH group. Thierry Nataf led the brand from 2001 to 2009 and instigated the Open concept, named after the opening in the dial through which the beating escapement can be seen. In 2007 he launched the Defy range of extremely robust watches whose calibre incorporates Zenithium, an exclusive alloy developed by the manufacture. Jean-Frédéric Dufour took the helm of Zenith until 2014. During his tenure, he retrained the spotlight on the brand’s pilot watches with, in 2012, three new Pilot models. Since the LVMH acquisition, the company focus only in mechanical movements in the prestige segment. The current CEO of the company is Aldo Magada.

We got lucky this year at Baselworld as we had a private appointment with the Zenith Team. They were able to explain to us in further details the Zenith universe based on a vintage yet dynamic environment. From the legendary Cafe Racer spirit to the Pilot watches, Zenith expresses a very masculine, timeless and elegant message that will definitely please the fans and potentially new  customers.

In terms of new watch models, we were quite inspired by the new launches, there is a strong story-telling spirit in Zenith watches, you just need to look at them to start dreaming. Style, authenticity and pleasure: Zenith will be taking Baselworld visitors on a thrilling journey. They will have the opportunity to enjoy a ride in a classic car, a little pampered downtime in a traditional barber’s lounge or to be part of the first Distinguished Gentleman’s Ride of Baselworld. Five iconic new watches will showcase that vintage, craftsmanship and passion have never been so current and in sync with the future. Here some examples:

Zenith is keeping its star bright and shine and for the new 2016 Baselworld edition, the result is very elegant, timeless and sharp. Info sourced at the private appointment with Zenith in Baselworld 2016. All content is copyrighted with no reproduction rights available. Images are for illustration purposes only.

Baselworld 2016 – on time with Hermès

Baselworld 2016 – on time with Jaquet Droz

Baselworld 2016 – on time with TAG Heuer