In one month time the 2018 Cannes Film festival will start and this year and one big novelty is that there will be no selfies allowed during the photocall on redcarpet. Thierry Frémaud, General manager of the festival, believes that celebrities should take advantage of the professional photographers present. He also declared that a selfie is a ridiculous and grotesque activity. We already know that there will be no Kardashians / Jenner this year at Cannes…. 🙂 More seriously, here is what we know so far about this year edition.

In the history of Cannes film festival, not so many women got the prestigious role of president of the jury. In 2018, after all the sexist scandals, the #metoo initiative, Cate Blanchett will be the 71st President. Weinstein is persona non grata at the festival. The 48 years old Australian actress is a true activist in the protection of women in cinema. It is expected to hear a few words about this painful and important topic from her. On 71 editions only 12 had a woman president. Cannes can do better. Here is the list of women president of the jury since the festival foundation in 1946:

Cate Blanchett is a multi-rewarded accomplished actress. With 2 Oscars for best actress (Aviator and Blue Jasmine), 3 Golden Globes and 2 BAFTAS, she is for sure one of the most gifted and elegant actress of her generation. It is clearly a great choice for Cannes.

“I have been to Cannes in many guises over the years; as an actress, producer, in the marketplace, the Gala-sphere and in Competition but never solely for the sheer pleasure of watching the cornucopia of films this great festival harbors.” – Cate Blanchett

To note that the master of ceremony this year is Edouard Baer. He already hosted the ceremony two years in a row in 2008 and 2009 and the organizers believe he is the ideal presenter for the show.

No Avant-premières This Year at Cannes

one important decision this year at Cannes is that there will not be any morning session avant-premiere for the press. Everybody will discover the films in the evening sessions, corresponding to the official release time. Journalists will need to work late at night to bring their critics the next morning. With this new change, the festival wishes to maintain suspense until the last minute. Also let’s note that the festival will start sooner than usual. Historically the Cannes film festival takes place every year mid-May. This year, the organizers decided to start it sooner, from the 8th to the 19th of May. It seems this would give more chances to get all the big producers, actors and film distributors there. Let’s not forget that Cannes is also the biggest film marketplace in the world. Last but not least, the festival will end on a Saturday with the announcement of the palme d’or. Until last year, The last Sunday was always a weak day where everything was wrapped up the previous day. The Cannes film festival wants to finish the journey with a high pitch! Therefore there will be a big production as the closing film of the festival. For the record, Cannes will also happen during the Royal wedding of Prince Harry and Meghan Markle. Hopefully it will not erase the festival from the news. 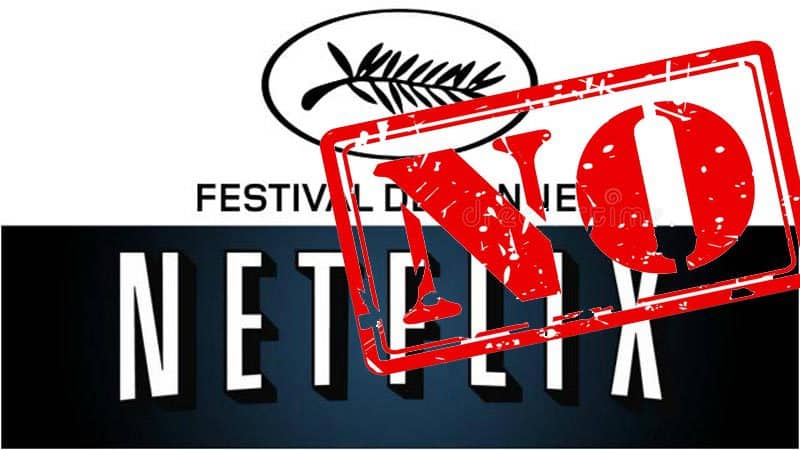 The Cannes film festival announced they have changed the rules since last year concerning Netflix. In the 2017 edition, two films competing were from Netflix, meaning no distribution in the movie theaters. The Meyerovitz Stories » from Noah Baumbach, with Adam Sandler and Dustin Hoffman, and « Okja » from Bong Joon-Ho, with Tilda Swinton an Jake Gyllenhaal were running for best picture. This year the message is very clear, all participating movies require a distribution deal in theaters. So bye bye Netflix and other online streaming platforms. With the rise and the financial power of platforms like Netflix, there is a shift in the film industry, with a total producer budget of two billion dollars, Netflix is capable to compete with any film studios today. The big difference is that all movies they produce remain within the online streaming platform. This is not supporting movie theaters that are having a hard time to bring people back to the “big screens”. Thierry Frémaud makes a big statement by keeping the competition for films with regular distribution. In case Netflix still wants to come to Cannes, they can present films “hors competition”.

Other Interesting Facts About Cannes This Year

First things first. This year we have the return of the “opening film”. Everybody Knows by Asghar Farad with Penelope Cruz and Javier Bardem will open the competition as it will also run for the palme d’or. Last time Cannes had an opening film it was in 2012 with Moonrise Kingdom by Wes Anderson. Another film to highlight is the world premiere of SOLO, the new Star-Wars spin-off. Historically, it is the third time there is a Star-Wars movie revealed in Cannes. Last but not least, the Swiss talented director-producer-actress Ursula Meier will be the president for the Golden-Camera prize. It is an important prize as it rewards young talents for their first film. By giving this responsibility to a Swiss director, means Switzerland has great talent and a clairvoyance about the future of cinema.

You can read more about the incoming Cannes film festival by visiting the official website here: http://www.festival-cannes.com
The 2018 Cannes film festival will start in less than a month. Everything is already getting ready for this shinning moment in the year of cinema. Silence, roll camera…. and action!

Info sourced in the official communication of the Cannes Film Festival, website, Elle.com, Forbes, Wikipedia and Hollywood Reporter. All content is copyrighted with no reproduction rights available. Images are for illustration purposes only.