Victoria’s Secret became the largest business in lingerie worldwide and each of their fashion shows are considered as the super bowl of fashion. Nevertheless sales are not anymore there and most of business analysts say it is game over for the American brand.

Victoria’s Secret was founded by Roy Raymond, and his wife Gaye Raymond, in San Francisco, California, on June 12, 1977. Legend says that eight years prior to founding Victoria’s Secret, in the late 1960s, Raymond was embarrassed when purchasing lingerie for his wife at a department store. Newsweek reported him looking back on the incident from the vantage of 1981: “When I tried to buy lingerie for my wife, I was faced with racks of terry-cloth robes and ugly floral-print nylon nightgowns, and I always had the feeling the department store saleswomen thought I was an unwelcome intruder.” Raymond spent the next eight years studying the lingerie market and Victoria’s Secret was born.

In 1995, Victoria’s Secret began holding their annual Victoria’s Secret Fashion Show, which is broadcast on primetimeAmerican television. Starting with the 1995 fashion show, they are “a combination of self-assured strutting for women and voyeuristic pleasures for men—and lingerie becomes mainstream entertainment.”

Game Over: Society Has Changed, Victoria’s Secret did not.

Despite of their market leadership, It seems nobody wants Victoria’s Secret lingerie anymore. The sexy brand had significant sales drops in the past 6 quarters results announcements. This means a drop in value of 65% in the past 3 years. The brand was born during a moment in time in which sexual revolution helped liberate certain things. Victoria’s Secret brought lingerie to the open, first in the stores, then on fashion catwalks and at finally in the streets. Unfortunately society has evolved and changed…. Victoria’s Secret did not. They are still advertising women like in the 90’s.

Victoria’s Secret still present women as an object of desire, unfortunately there are things that happened in the last 5 years that show that this image of women is not desired anymore. The American company has been slow in understanding cultural changes. With things like the #MeToo movement and the fact that “Sexy” has evolved into multiple possibilities, bring Victoria’s Secret into a tremendous anachronism.

“Are they aware there’s this thing called #MeToo out there?” – Candace Corlett, President of WSL Strategic Retail

If you go to the Victoria’s Secret Facebook page you realize that people are unhappy with customer service, product quality and even the image they picture about women. We can see that the world changed and Victoria’s Secret is not the ultimate lingerie for women.

“It is basically pornography that everyone (children and teens) are subjected to viewing because there is only one area to check out between Pink and Victoria’s Secret, which happens to have the most obscene photos behind the registers” – Jessie S.

We will not talk about the fact that most of Victoria’s Secret models are under the health BMI limit, but above all, it is the image of femininity that is too cliché and has been. The image of a sort of modern amazon, with long hair, high-wheels and very sexy does not work anymore. .

Not sure all this iconography is supposed to please women after all. It is hard to think that women would identify themselves with these images.

Obviously, what is also contributing the bad results of Victoria’s Secret is the rise of competition that embrace today’s state of mind and become much more relevant to women customers . One interesting example is American Eagle, that launched Aerie their lingerie segment. They present women in a much more relevant way, still young and sexy but far away from clichés.

Aerie has doubled down on its efforts to appeal to female shoppers, ditching photoshopped images and partnering with women activists to promote female empowerment. It seems to be resonating well with consumers. Aerie had a sales increase of +38% in the first quarter this year. 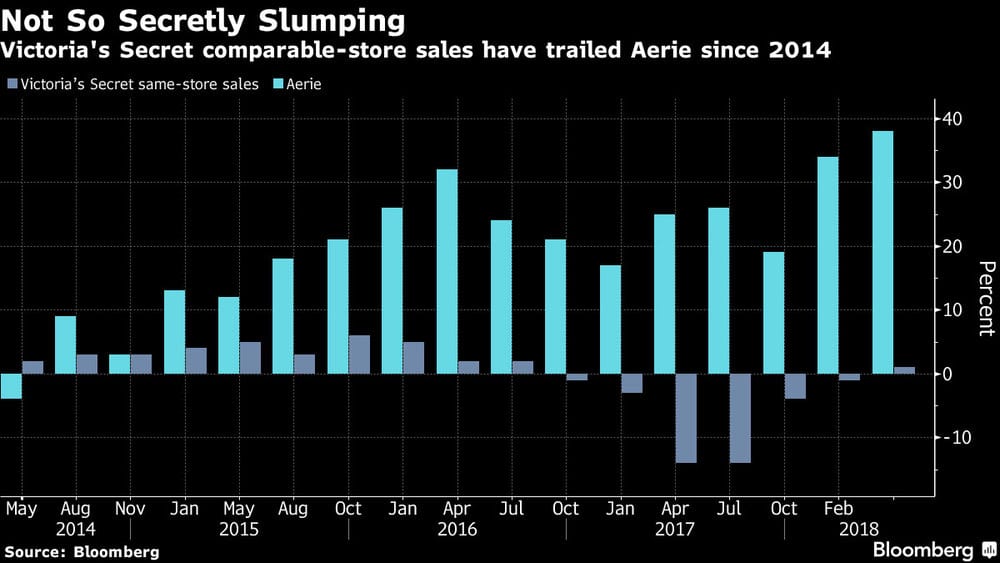 In the chart here above we can see the evolution of sales between Victoria’s Secret and Aerie since 2014. This shows one thing: Victoria’s Secret is only getting worse. With the rise of brands like Under Arm, American Eagle and even Nike, we can see that women are more keen into comfort and design rather than ornamental lace and over-rated sexiness. This is what happens when a  market leader stop innovating and surprising their customers by just living on what they think it is acquired by default. More to come in the incoming weeks.

Info sourced at Bloomberg, CBS News, WWD, Business Insider, Wikipedia, Forbes and T Mag by NYT. All content is copyrighted with no reproduction rights available. Images are for illustration purposes only.