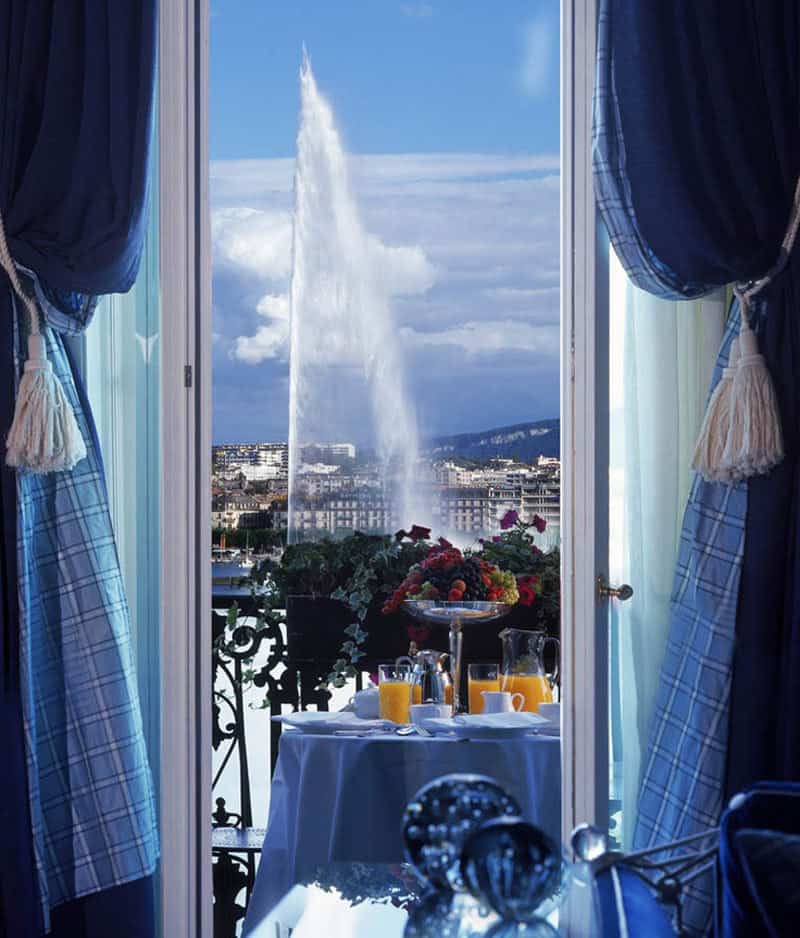 Geneva is one of the world luxury capitals. From Rue du Rhone to Quai des Bergues, the city of Calvin is one of the best destinations for a luxury traveler. In order to help you organize your trip to Geneva, here are our top 5 best luxury hotels of the city.

Geneva is the second most populous city in Switzerland (after Zürich) and is the most populous city of Romandy, the French-speaking part of Switzerland. Situated where the Rhône exits Lake Geneva, it is the capital of the Republic and Canton of Geneva. The municipality (ville de Genève) has a population (as of December 2015) of 198,072, and the canton (which is essentially the city and its inner-ring suburbs) has 484,736 residents. In 2014, the compact agglomération du Grand Genève had 946,000 inhabitants in 212 communities in both Switzerland and France. Within Swiss territory, the commuter area named “Métropole lémanique” contains a population of 1.25 million.[citation needed] This area is essentially spread east from Geneva towards the Riviera area (Vevey, Montreux) and north-east towards Yverdon-les-Bains, in the neighbouring canton of Vaud.

Geneva is a global city, a financial center, and worldwide center for diplomacy due to the presence of numerous international organizations, including the headquarters of many of the agencies of the United Nations  and the Red Cross. Geneva is the city that hosts the highest number of international organizations in the world. It is also the place where the Geneva Conventions were signed, which chiefly concern the treatment of wartime non-combatants and prisoners of war. Geneva was ranked as the world’s ninth most important financial centre for competitiveness by the Global Financial Centres Index, ahead of Frankfurt, and third in Europe behind London and Zürich.

As a luxury traveler, when you travel to Geneva, you need to stay in a stylish and luxury place in order to make sure you experience a great journey in the glamorous city. Here are 5 most luxury hotels, you just make your choice. 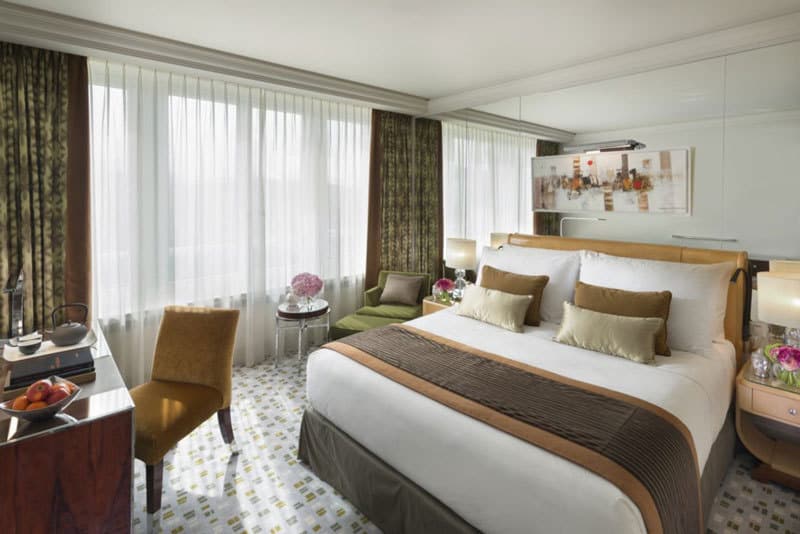 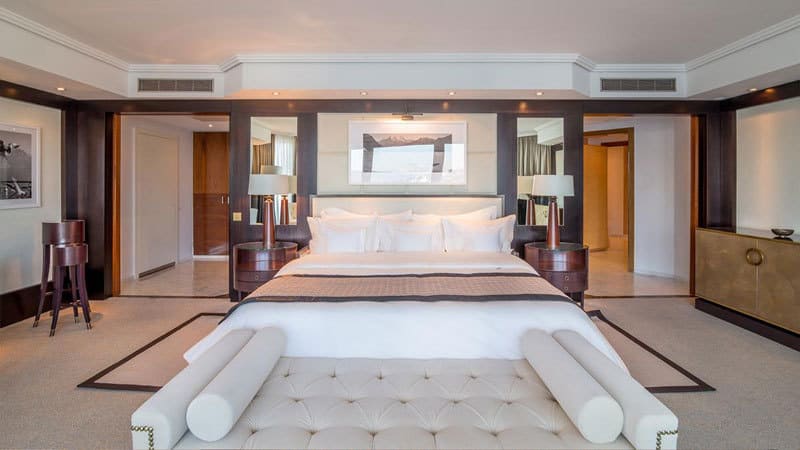 Grand Hotel Kempinski Geneva is a destination spot all on its own – a lively after work entertainment complex, a luxurious staycation option, a peaceful respite in an urban setting…or a private, lavish haven that far exceeds their guests’ expectations. A true “oasis in the heart of the city”, Grand Hotel Kempinski Geneva is also home to three exclusive gourmet restaurants, a cozy Lounge area and a Bar, all of them with breathtaking views; abundant event and meeting space, upscale shops and boutiques; an elite spa and fitness center ; and the largest private, indoor swimming pool in Geneva.
Presidential Suite – 10’840 CHF per night
Regular room – 560 CHF per night
https://www.kempinski.com/en/geneva/grand-hotel-geneva/ 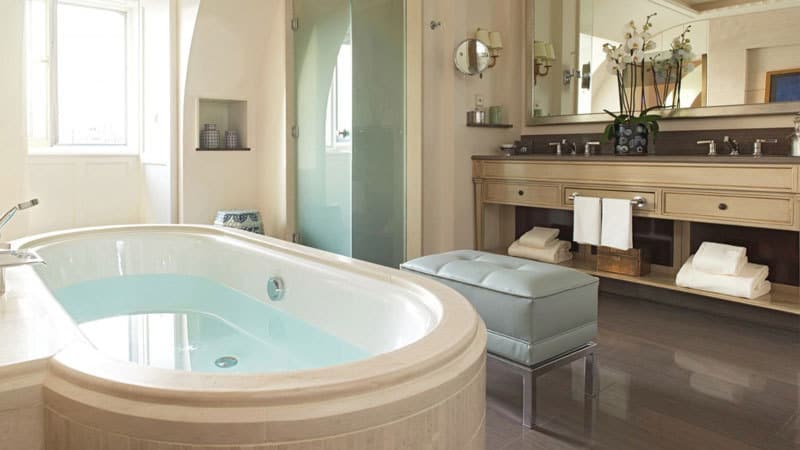 The city’s first hotel, and still the first choice of sophisticated travellers and world statesmen, has been a landmark on Lake Geneva since 1834. Now, as Four Seasons Hotel des Bergues, it blends a revitalized sense of history with comfort, relaxation and warm, genuine personal service. Bright and airy Four Seasons Executive Loft Suites feature high ceilings and large windows, with views of Lake Geneva. The bedroom is secluded from the spacious living room, allowing privacy for business meetings or entertaining.
Royal Suite – 12’000 CHF per night
Regular room – 760 CHF per night
http://www.fourseasons.com/geneva/ 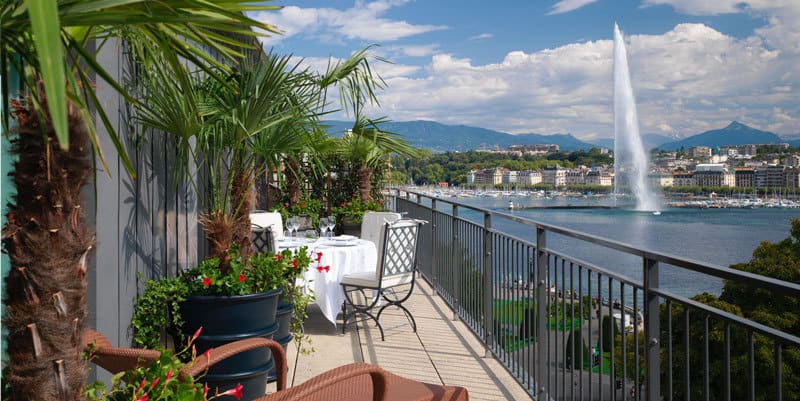 Set on the banks of Lake Geneva, by the famous Jet d’Eau, Le Richemond is at the heart of a city known for its style and grace. Le Richemond features 109 stunningly decorated rooms including 22 sumptuous suites featuring a lake or courtyard view. With luxurious marble bathrooms, deluxe comforts and extras, and an expert concierge service on offer, a stay at Le Richemond is a true experience in luxury hotel living. Our stunning signature suites offer breath-taking views of the snow-capped Mont Blanc, Brunswick Gardens, or the magnificent Lake Geneva. Spacious and beautifully adorned in rare woods, fine materials and stunning artisanal detailing, such as mosaics, the Royal Armleder Suite has some of the finest views in all of Geneva, and is a truly majestic experience.
Suite Armleder – 21’990 CHF per night
Regular room – 2’890 CHF per night
https://www.dorchestercollection.com/en/geneva/le-richemond


Hotel President Wilson, most expensive of the world 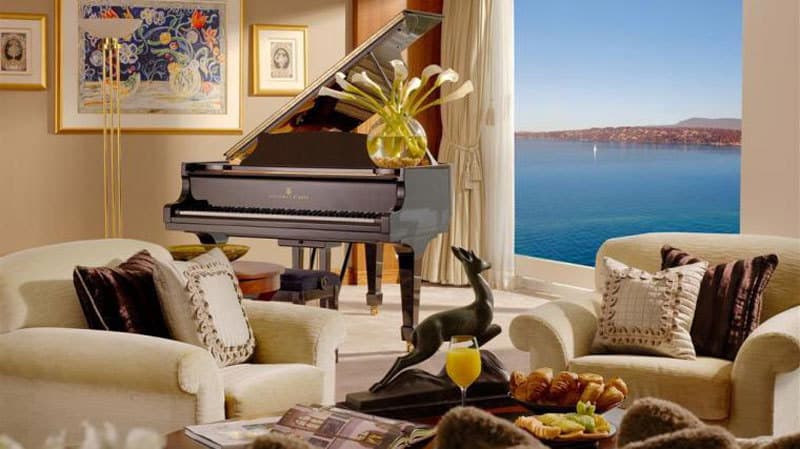 Situated on the Leman lake shore and just steps from the most beautiful parks and boutiques of the renowned Rue du Rhône, Hotel President Wilson is one of the most contemporary addresses in Geneva, facing the magnificent panorama of the Mont-Blanc. Discover a culture of service reflecting the Genevan lifestyle and a fine Swiss heritage. With large bay-windows offering a panoramic view over Lake Leman, the hotel pool or Geneva city, all 180 Rooms and 48 Suites of the luxury hotel combine comfort and elegance. Live an exclusive experience at Spa La Mer and its outdoor pool overlooking the lake, and succumb to the delicacy of the Michelin starred cuisine from famous Chef Michel Roth.
Royal Penthouse Suite – 65’000 CHF per night.
Regular room – 380 CHF per night
http://www.hotelpresidentwilson.com


Sleek, slick and cosmopolitan, Geneva is a rare breed of city: it’s among Europe’s priciest, its people chatter in every language and it’s constantly perceived as the Swiss capital (it isn’t). Superbly strung around the shores of Europe’s largest Alpine lake, Switzerland’s second-largest city has only half the population of Zürich; yet the whole world is here: 200-odd governmental and nongovernmental international organisations fill Geneva’s plush hotels, feast on its international cuisine and help prop up its famed overload of banks, luxury jewellers and chocolate shops. But where’s the urban grit? Not in the lakeside’s silky-smooth promenades and iconic fountain of record-breaking heights, nor in its pedestrian Old Town. To find the rough cut of the diamond, dig into the Pâquis quarter or walk along the Rhône’s industrial shores where local neighbourhood bars hum with attitude. This is the Geneva of the Genevois…or as close as you’ll get to it.

Info sourced t the official hotels websites as well as wikipedia. All content is copyrighted with no reproduction rights available. images are for illustration only.

5 Secret Luxury Hotels in Geneva You Should Know.

10 Exciting Locations In Switzerland To Spend Your Summer Holidays

How to Pick the Perfect Luxury Hotel

Top 6 best Spas around the Leman Lake in Switzerland.