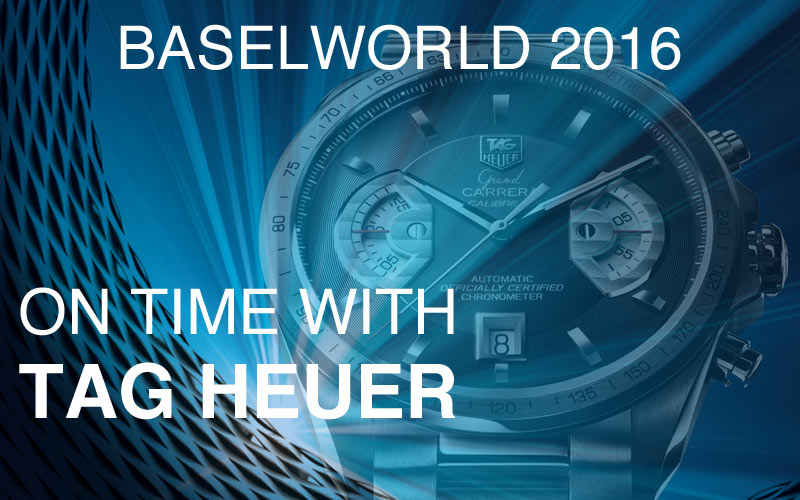 TAG Heuer is an amazing watch-manufacturer that from day one placed its talent at the service of innovation, performance and avant-garde. Back in 1860, Edouard Heuer opened a watchmaking workshop in Saint-Imier in the Swiss Jura. At that time it was called “Edouard Heuer, Fabrique d’Horlogerie”.
He is the first watchmaker to produce chronographs in series in 1880. He invents all the basic elements and principles that make all chronographs, still today. From the oscillating pinion in 1887 to the Mikrogirder in 2012, TAG Heuer has left its mark on the history of Swiss watchmaking. Over 145 years of innovation and expertise have made TAG Heuer one of the ultimate references in avant-garde sports watches.

Very fast, Heuer watches became very popular in the sports domain. This sets the company philosophy: a cutting-edge technical know-how at the service of performance. After the purchase of the brand by the TAG group in 1985, the company got its final name: TAG heuer. In 1999, LVMH acquired the Swiss watchmaker and gave its true international aura and distribution. It is now the leader in luxury chronographs of unrivalled precision, measuring time to 1/10th, 1/100th, even 1/1000th of a second. From the Olympic Games in 1920 to its role as official watch and chronograph for the legendary Indy 500 race, for which it has developed instruments with a precision of 1/10000th of a second, TAG Heuer is unrelenting in its quest for innovation, excellence and performance.

Every year at Baselworld, TAG Heuer surprises us with a great Swiss ingenuity and a dedication to “time-keeping” that goes beyond standards. This year, once again and after the launch of its CONNECTED watch, they presented a clever, professional and aesthetic collection with some very interesting highlights.

The Press conference of Tag Heuer was a mind-blowing experience. In presence of TAG Heuer CEO JC Biver, we were able to discover the most important novelties. The first one is the MONZA HEUER WATCH.

In 1976, Jack Heuer, the great grandson of the brand’s founder, designed a chronograph to celebrate Niki Lauda’s first world championship title with FERRARI. The Swiss watch company was then Official Timekeeper for Scuderia (from 1971 to 1979), and it was the first time that MONZA had appeared on the dial of a watch. At that time, the watch was markedly different, yet very stylish. Its coussin case was inspired by a 1925 model. An all black chronograph equipped with a pulsometer (to measure the heart rate) and a tachymeter scale (which converts time into speed), red hands and counters to reflect its racing heritage, the new design ushered in a brand new era in the history of this model.

A link from past to present, the case is now made from grade 5 titanium (previously steel), making it lighter and more shock resistant. The material is coated with titanium carbide to give it a powerful, matt black appearance. The diameter has also been increased (from 39 mm on the original models to 42 mm, for a more modern, masculine look). It is equipped with a “super racing” strap in full-grain black calfskin with top-stitching, which evokes the design of the three-spoke steering wheel on the racing cars of the time. Inside, the 17 automatic calibre, a chronograph with its two chronograph counters at 3 o’clock and 9 o’clock – perfectly spaced for a beautifully harmonious dial. The screw-on back is numbered and features the historic HEUER logo engraved with red lacquer finish.

The original Heuer Monza is highly sought after by collectors, and has been reissued only a handful of times. So close to the spirit of the original, this model, which celebrates its 40-year anniversary, will undoubtedly represent a milestone in the history of the manufacture’s heritage.

The second high-light of the fair is the new TAG HEUER CARRERA HEUER-02T. With this watch, Tag Heuer is creating the buzz of the fair. Indeed, the Swiss watch-manufacturer just released an amazing flying Tourbillon for less than CHF 15’000. They explain that by mastering the entire production chain, they have successfully put in place a true tourbillon for a reasonable price. And the result is quite outstanding.

Just six months after the release of the TAG Heuer Carrera Heuer-01- the backbone of a new collection of elegant and contemporary manufacture chronographs- comes the TAG Heuer Carrera Heuer-02T, a COSC-certified automatic chronograph combined with a titanium and carbon flying tourbillon. A symbol of the accessible luxury so dear to TAG Heuer, this model forms part of a new concept now being created: affordable Haute Horlogerie. This watch symbolises technology, exemplary quality, performance, manufacture expertise, and the perfect mastery of industrial processes and manufacturing costs which have made it the only COSC automatic chronograph with Tourbillon produced by the Swiss watch industry for under 15,000 CHF.

Last but not least here is an update on the TAG HEUER CONNECTED WATCH. Five month after the launch of the Connected watch by TAG Heueur, the updates are tremendously exciting. For the launch in November 2015, TAG Heuer has produced 20’000 pieces of its Connected watch. At that time many people in the company were skeptical. 5 month later the watch is sold out. Now Tag Heuer is making a lot of efforts to answer the demand. They have re-ordered 60’000 new pieces, with a production rhythm of 2’000 units per week since January until April. Then, they will hit the market from April on. TAG Heuer is also producing the Connected watch fully in Switzerland, thanks to a collaboration with high-tech company in Zürich. The ambitions for the Connected watch is big. Next year, 2017, TAG Heuer plans to produce 200’000 units. Currently dozens of people are related to the production of this watch. TAG Heuer is the first Swiss company to truly embrace the wave of smart-watches.

Living, travelling, getting information, connecting… the TAG Heuer Connected watch is the perfect partner. It brings together the best of both worlds: a magnificent TAG Heuer watch with computing intelligence. TAG Heuer worked closely with Intel and Google to create a luxury watch that combined connectivity and computing intelligence with Swiss watchmaking heritage. The watch features an Intel® Atom™ processor Z34XX and runs the Android Wear platform. As JC Biver explained, TAG Heuer has placed a computer on your wrist and the possibilities are incredibly huge.

This year again, TAG Heuer has brought their know-how and the innovative approach they have from watch-making, being always in the Swiss avant-garde. Info sourced at private appointment with TAG Heuer in Baselworld 2016. All content is copyrighted with no reproduction rights available. Images are for illustration purposes only.

Welcome To The New Gods of Fashion