It is always surprising to see there are people in this world who spend most of their time analysing, observing, digging out, searching and revealing every single thing Apple might do. At least the good news for the Curpetino company is that they do not need to spend millions of dollars in viral and buzz campaigns. People do it for them for free. Last rumour that becomes a reality is what we call the e-Ink keyboard. The tecnology itself is not a rumor but the viral component comes from the idea that Apple might equip the next generation of laptops with it. And this is big news as it has been a little while that Apple did not focus on their macbook pro range.

What is the e-Ink keyboard?

As we all know, a laptop keyboard is by nature…. small. You cannot have all the keys you wish and sometimes (depending on your keyboard language) certain letters are almost impossible to hit. Did you ever tried to do the hashtag sign # or a copyright © on a macbook keyboard? Unless you know the combination of multiple keys, you will be looking at your keyboard for several minutes and realize you cannot do it. Here is how e-ink keyboards will play a majestic role.
The e-ink technology exists since the 70´s. A clever engineer from Xerox PARC started working on a project of electronic paper that would display texts and even pictures from a low energy consumption support. Unfortunately he never succeeded to make it happened. 16 years later the technology surfaced in the MIT and several scientific papers were published and the technology pattented. The E-Ink Company was created and several applications were found through the years. From mobile phones to e-books readers, the e-ink technology got perfected, improved and miniaturized.
The initial approach was to create tiny spheres which were half white and half black, and which, depending on electric charge, would rotate such that the white side or the black side would be visible on the display. Albert and Comiskey were told this approach was impossible by most experienced chemists and materials scientists and they had trouble creating these perfectly half-white, half-black spheres, and during his experiments, Albert accidentally created some all-white spheres. Comiskey experimented with charging and encapsulating those all-white particles in microcapsules mixed in with a dark dye. The result was a system of microcapsules which could be applied to a surface and then could be charged independently to create black and white images. A first patent was filed for this microencapsulated electrophoretic display by MIT in October 1996. 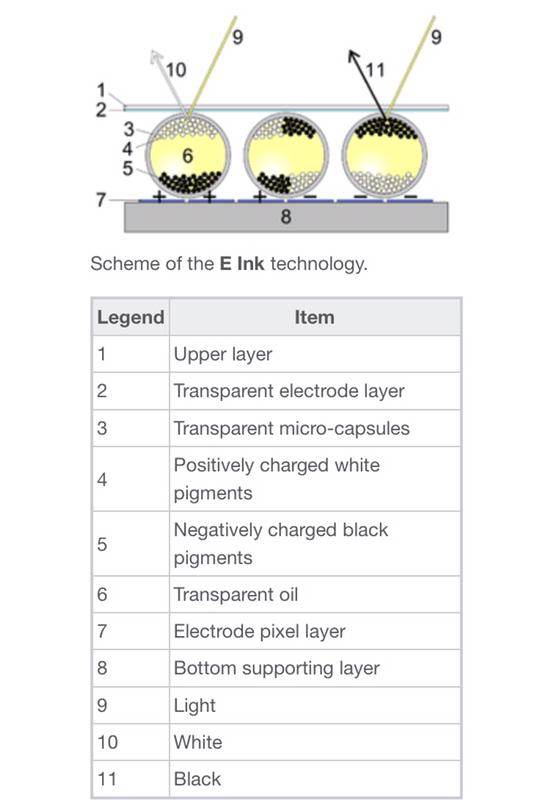 One of the most known applications of this technology is the Amazon Kindle. The famous e-book reader utilizes the e-ink technology. Thanks to its high-contrast display and drastic low-power need, it makes the perfect portable digital display technology. In the image below you can see a big zoom-in into a Kindle screen. We can easily see the small black and white capsules.

Apple and the e-ink technology

Why Apple is now taking in consideration this technology into its hardware? Probably the iPhone/iPad virtual keyboards helped Apple to understand that people are happy to have several keyboards installed and the hability to press on a key and get more options is something very useful and practical.

10 years after the launch of the first Macbook, Apple realized that laptops became lighter, more performant, very design. The mouse or let’s say the pointer evolved. We have retina screens and HD cameras. Software evolved a thousand times and the only thing that remained the same (more or less) are keyboards. Everytime you buy a new laptop you need to order your country/language keyboard, and get used to some modifications. As the laptop concept tends to be smaller and more portable, the choice of each key is crucial. It started first with the disapearing of the numerical keys, replaced by multi-task keys and the usage of shift+… Then, certain special characters like Hashtags or copyright signs became a higher level of key combinations with Alt+…. Apple is definitely trying to use technology to make your life easier.

It has been more than 17 month that there was no updates in the Macbook Pro range. On September 7th we expected to see a new series of Macbook but the scene was stolen by the iPhone 7, iPhone 7 Plus and the Apple Watch 2. Now rumors say that on October 27th, Apple will release their update on their laptop series. Some people say there will be a new AMR Processor and the e-ink keyboard that would for sure bring the macbook series to another level of technology. As the mini-jack disappeared from the iPhone 7, people speculate about the disappearance of this plug from the Macbook Pro as well. It would be either replaced by something else or completely erased. There is also the idea of a new “magic toolbar” as a customized interactive toolbar present in the top part of our laptop keyboard.

The only way to know for sure is to connect to the next Apple keynote on October 27th. For other queries about Apple, you can connect to the official website here: www.apple.com.

Info sourced at Mashable, Techcrunch, Le journal du Net, Macworld,Macrumors and wikipedia. All content is copyrighted with no reproduction rights available. Images are for illustration purposes only.

Apple where are you? I mean the real Apple!