For all French Absinth lovers, this is good news. Larusée has just signed a new distribution agreement with Hedon in France. This will allow to accelerate the build-up of the brand in the French territory. Larusée is a company established in Switzerland and produces Absinthe in the great Neuchâtel tradition.

Larusée, a glamourous tradition of Absinthe, made in Switzerland 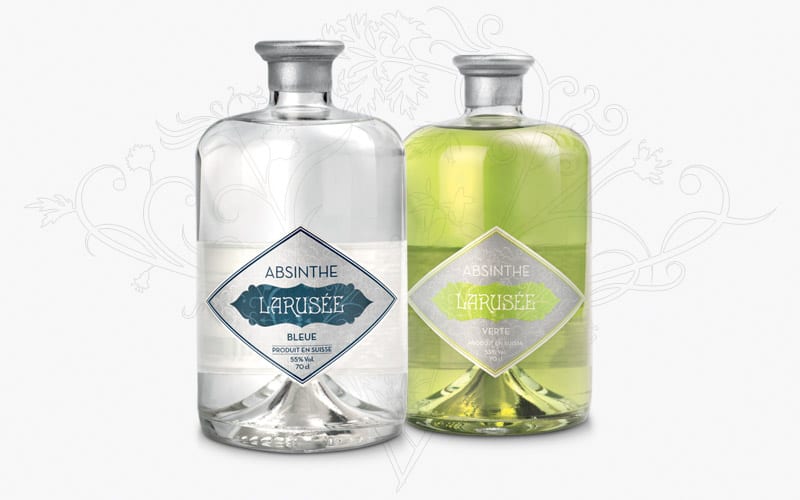 Absinthe originated in the canton of Neuchâtel in Switzerland in the late 18th century. It arose to great popularity as an alcoholic drink in late 19th- and early 20th-century France, particularly among Parisian artists and writers. Owing in part to its association with bohemian culture, the consumption of absinthe was opposed by social conservatives and prohibitionists. Ernest Hemingway, Charles Baudelaire, Paul Verlaine, Arthur Rimbaud, Henri de Toulouse-Lautrec, Amedeo Modigliani, Vincent van Gogh, Oscar Wilde, Aleister Crowley and Alfred Jarry were all known absinthe drinkers. A revival of absinthe began in the 1990s, following the adoption of modern European Union food and beverage laws that removed longstanding barriers to its production and sale. By the early 21st century, a few brands of absinthe were being produced in a dozen countries, most notably in France, Switzerland, USA, Spain, and the Czech Republic.

Larusée offers an elegant and refined vision of a historical drink and brings new life to a drink that has inspired so many poets and writers. How? By revisiting the codes of the genre! A bottle, all in curves and generosity, recalling the old apothecary bottles; a luxurious case bringing back to the boxes that were found in our grandmothers kitchens; two elements treated in a contemporary spirit. An ambitious communication, relaying a premium positioning. But all this would be nothing without a truly high-end product. An exceptional know-how.

Larusée and Hedon, when passionate people join forces for the very best

It was announced this month that Larusée has signed a new agreement with Hedon, a French Alsacien company to distribute and built the Swiss brand business in the French territory. As the reputation of Larusée is on an upward slope, it was decided not to operate in its own name, but to entrust distribution and brand construction in France to an independent distributor, thereby enabling Larusée to benefit from a wide network and a selective distribution, as well as better logistics. Larusée operates in France since 2013 thanks to its affiliate based in Paris. Now it seems it is the right time to increase operations and yet maintain the quality of the approach.

According  to the brand there was a long process to select the right partner to accomplish the brand ambition in France. After a careful analysis, Larusée chose Hedon, a company based in Strasbourg, led by Cédric Kanté, who shares the same values, the same love for fine products and the same objectives of development and growth as the members Larusée family. Hedon is also very experienced on the new spirits, and does a fantastic work in France. Hedon is present on almost all French soil and opens up new opportunities for Larusée to be served and sold in the most beautiful establishments.

Hedon, it is all about the very best.

Founded in Strasbourg in 2015 and specialized in the distribution of fine spirits, it is now run by Cédric Kanté, a Franco-Malian born in Alsace 37 years ago. He is a former professional footballer and an accomplished sportsman for 15 years. Freshly converted into the world of wines & spirits after a busy high-level sports career, he strives to find premium products with a strong identity, focusing on human adventure with the leaders of the brands it represents.

It is in this spirit that the Larusée and HEDON companies have decided to collaborate to propose and showcase the absinthes and other spirits of the artisanal distillery on the French market. Do not hesitate to connect to Larusée official website to discover more about this amazing brand: http://www.larusee.com

Info sourced in official communication release from the brand and website. All content is copyrighted with no reproduction rights available. Images are for illustration purposes only.