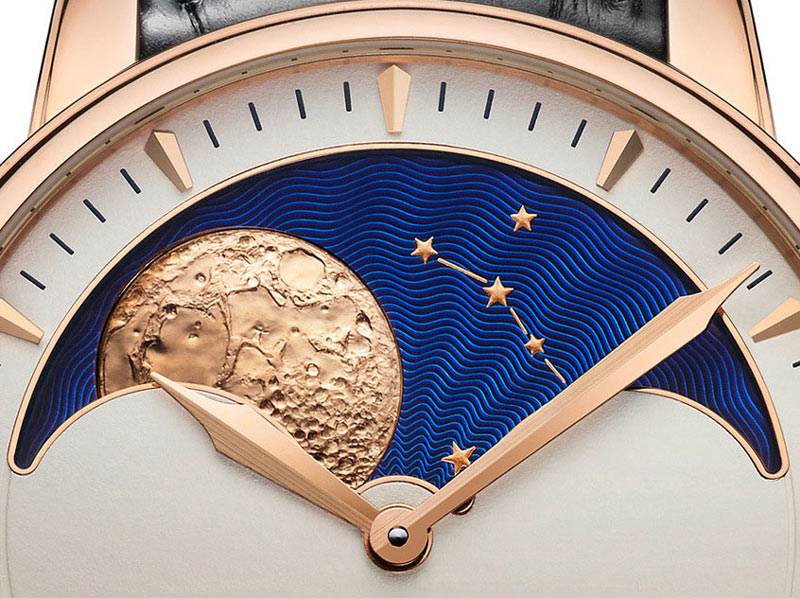 Watchmaking is a beautiful blend of technical mastery and poetry. Watchmakers are often considered as artists and from their ingenuity comes marvelous creations that keep your time. Some of the watches can do much more. What we usually call complications, bring an added value to the measure of time. This month, our watch blog decided to talk about a very interesting and one of the oldest complications in watch-making: the Moon Phases.

Moon Phases and the measurement of life

The lunar phase or phase of the moon is the shape of the illuminated (sunlit) portion of the Moon as seen by an observer on Earth. The lunar phases change cyclically as the Moon orbits the Earth, according to the changing positions of the Moon and Sun relative to the Earth. The Moon’s rotation is tidally locked by the Earth’s gravity, therefore the same lunar surface always faces Earth. This face is variously sunlit depending on the position of the Moon in its orbit. Therefore, the portion of this hemisphere that is visible to an observer on Earth can vary from about 100% (full moon) to 0% (new moon). A full cycle lasts for 29 and half days. While the sun position in the sky across the year will determine seasons, day and night, the moon phases will measure life. When men decided to measure life passing by they naturally aligned with the moon phases as it was a regular phenomenon happening through a cycle of 29,5 days. In Western culture, the four principal lunar phases are new moon, first quarter, full moon, and third quarter (also known as last quarter). These are the instants when the Moon’s apparent geocentric celestial longitude minus the Sun’s apparent geocentric celestial longitude is 0°, 90°, 180° and 270°, respectively. Each of these phases is instantaneous, lasting theoretically zero time, although they occur at slightly different times when viewed from different points on the Earth. 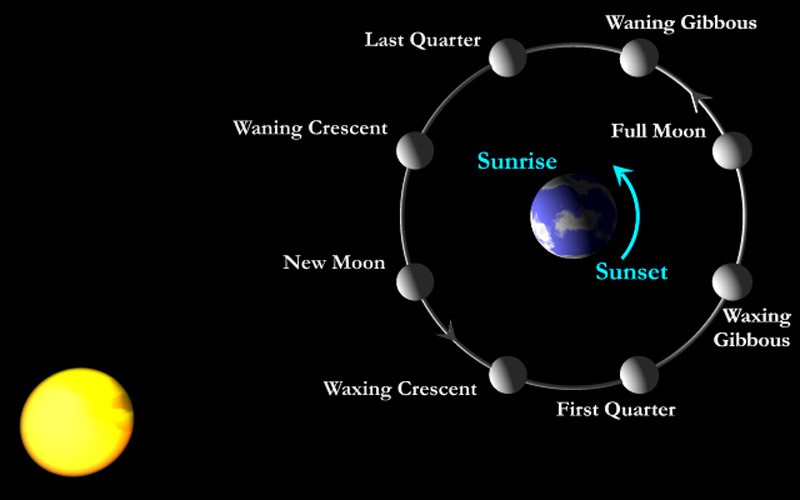 A “new moon” occurs when the moon and sun are in alignment on the same side of the Earth and thus there is no moon visible to us. As the moon travels through its monthly orbit, more of its surface becomes illuminated by the sun — known poetically as “waxing”. The second phase, known as the “first quarter”, is when the right-hand side of the moon is in the sun’s light. Next comes the “full moon” when the entire surface is lit up. Then it moves to the “last quarter” when the left-hand side is visible — waning — until it finally goes back to a new moon again.

In a certain sense, moon phases are quite poetic as it drives the cycle of nature (thanks to the moon gravity effects) like oceans tides and rising sap. It was also the most accurate system in the old times to measure the month passing by due to the length of s full cycle. So in the 19th century when watch-makers started getting really into complications, the moon phase was an interesting challenge for the pocket watch and then translated into the wrist-watch later in the 20th century.

Moon phases, how it works?

Some people tend to say that the heart of  a mechanical watch is about gears, wheels and linkage. Of course these elements are part of what is required to make a watch movement work. Nevertheless I would say that the most important element of a watch movement is the ingenuity of the watch-maker. Moon phases are a very interesting design element on a watch dial. Sometimes in the emptiness of a watch dial graphic construction, the moon phases complication brings a eye-catching element into the overall look of the watch. It is an open window into great mastery and precision. How it works? Well, if you open the watch and remove the dial, you will generally discover  a disc containing all the different phases of the moon cycle.

Sometimes it is just 2 complete full moon that will be cut b the dial aperture or in other cases each moon phase will be printed into the disc. This disc simply rotates one complete cycle every 29,5 days. What we would call the “moon-disc” is driven by 59 tooth gear that is rotated by a mechanical finger. It would be easy a part from one single important detail: the moon is not precisely doing its cycle in 29,5 days. To be more accurate (which is normal in watch-making) the moon is accomplishing its cycle in 29 days, 12 hours and 44 minutes. So in order to match this precision level, the moon-disc went from a 59 tooth to s 135 tooth gear in high-end watches. This increases accuracy beyond a lifetime. Every sophisticated moon phase complication will loose one single day in a period of time equivalent to 122 years.

The interest of measuring astral events with mechanics is not new. In the 14th century, all the works of Giovanni Dondi dell’Orologio brought a lot of understanding into the measurement of time. One of his highlights is his amazing Astrarium. The Astrarium, which he designed and built over a period of 16 years, was a highly complex astronomical clock and planetarium, constructed only 60 or so years after the very first mechanical clocks had been built in Europe, and demonstrated an ambitious attempt to describe and model the solar system with mathematical precision and technological sophistication. 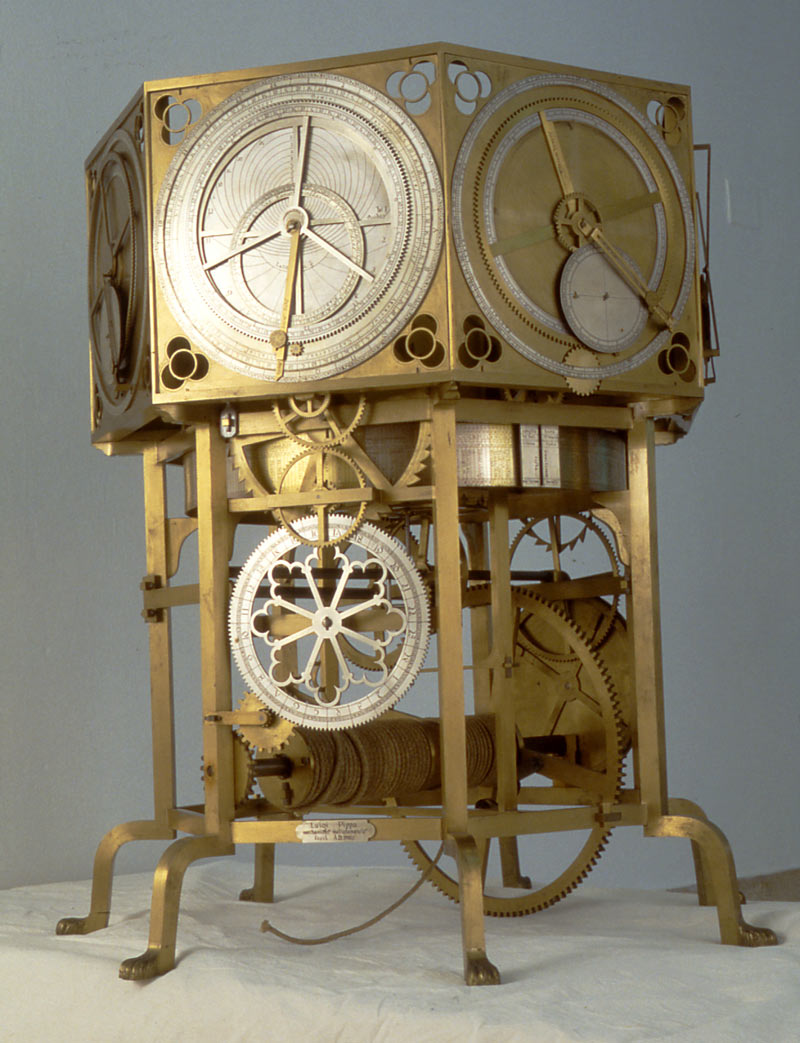 On May 17, 1902, an archaeologist named Valerios Stais discovered a lump of oxidated material with in it a mechanism with cogwheels that had been recovered from a shipwreck near Antikythera. This mechanism, known as the Antikythera mechanism, was recently redated between [150 to 100 BC]. Extensive study of the fragments, using X-rays, have revealed enough details (gears, pinions, crank) to enable researchers to build partial replicas. Engraved on the major gears are the names of the planets (such as Venus), which leaves little doubt as to the intended use of the mechanism. 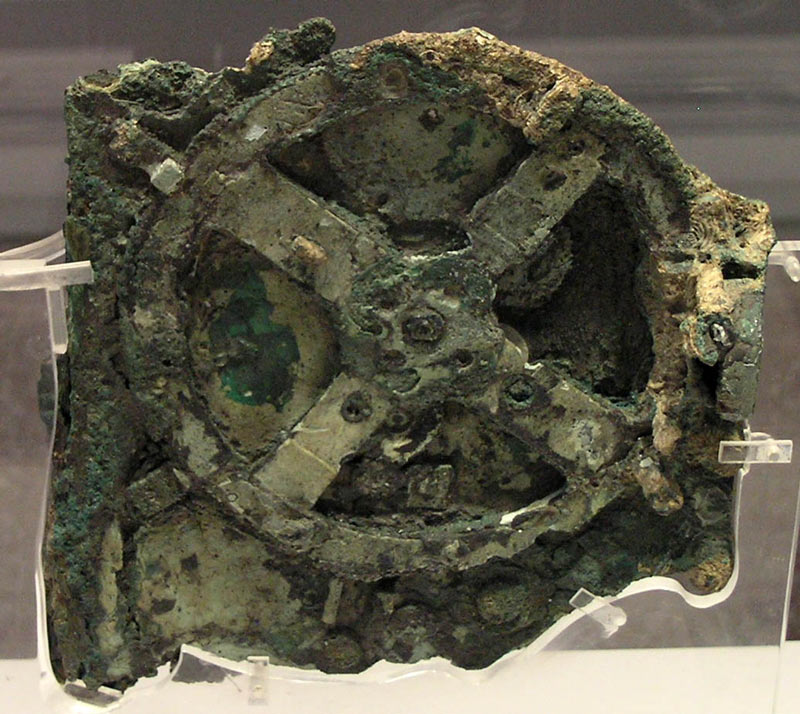 Probably the first pocket watch containing a moon phase complication night be this 1605 watch made by H.Roberts. The lunar/solar differential would be 13.312 thus when moon indicator has rotated 13.312 times the moon image has rotated 2.06 times giving a lunar phase of 29.48 days. In the middle a rotating silver disc 1-29 for moon’s age. Rotating gilt-brass disc at the centre engraved 1-12 1-12 and with an aspectarium in which is an aperture to show the phase of the moon. 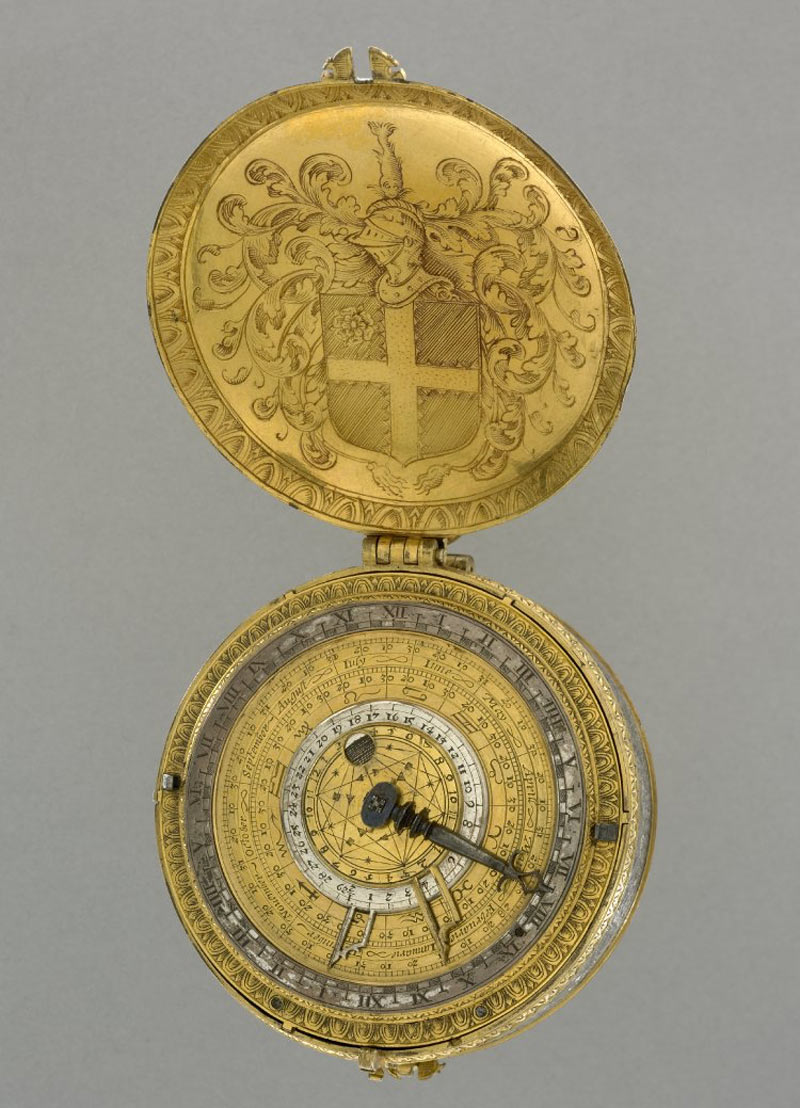 So we can see that watchmakers and engineers have been fascinated by the measurement of time as well as by the measurement of astral phenomenon. Moon phase is a beautiful and poetic complication giving some soul to your timepiece. Here are 3 Moon Phases watches that you might not know about it. All three are amazing watches made by true luxury watch-makers. 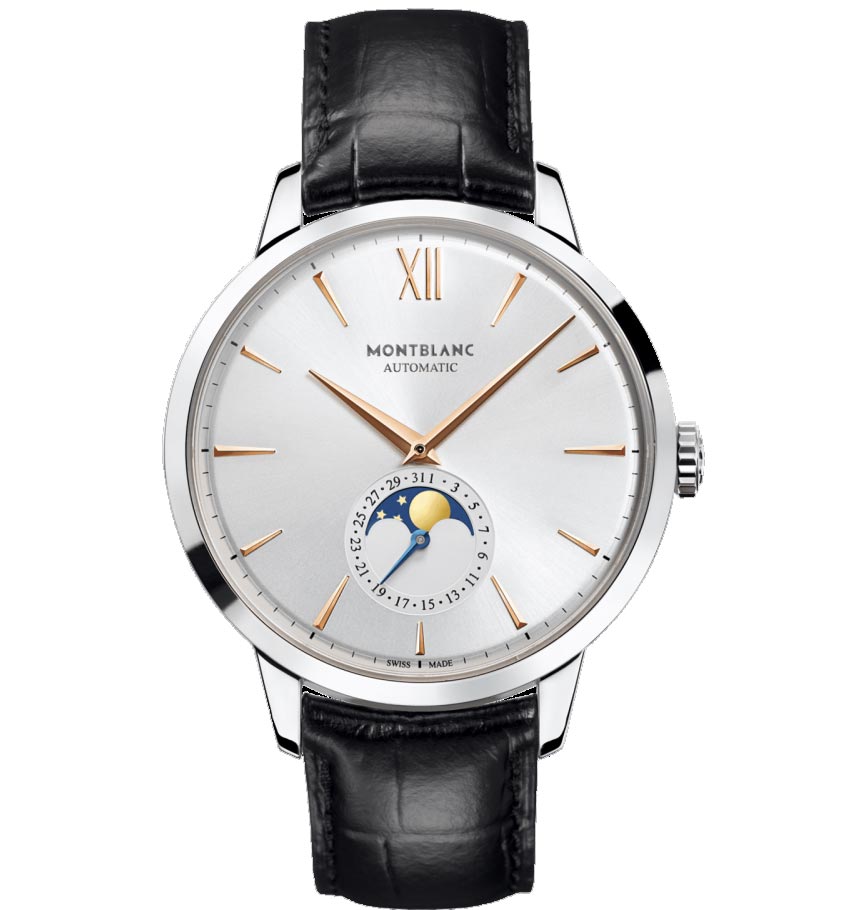 The Montblanc Heritage Spirit Moonphase manifests the values of the Montblanc Meisterstück and embodies the finest Swiss watchmaking codes: pure elegance, bombé dial with sunburst finish, applied indexes, faceted hands in the classical dauphine shape and differentiated polished and satin surface finishes on the case. With its classical and timeless interpretation of the moon phase and date, the watch exudes a strong and sophisticated presence on the wrist.
http://www.montblanc.com 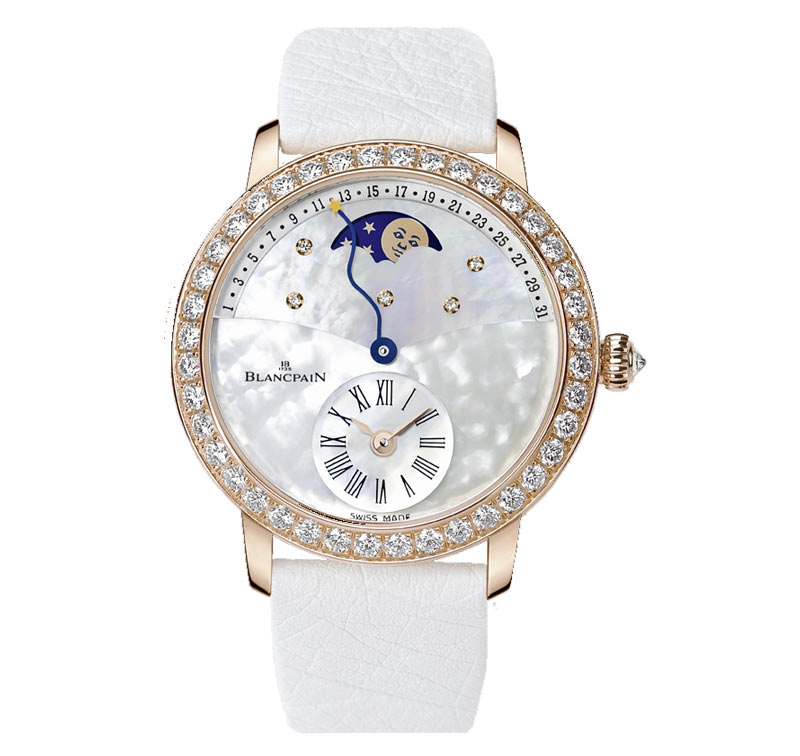 From 1930 onwards, Blancpain played a pioneering role in the history of ladies’ watches by presenting the first self-winding wristwatch for women. This 36mm case is in Red Gold with a set of one diamond row. The dial is a beautiful Mother-of-Pearl set with diamonds. A beautiful and elegant work. The Moon Phase comes as a strong visual element in the watch face.
http://www.blancpain.com 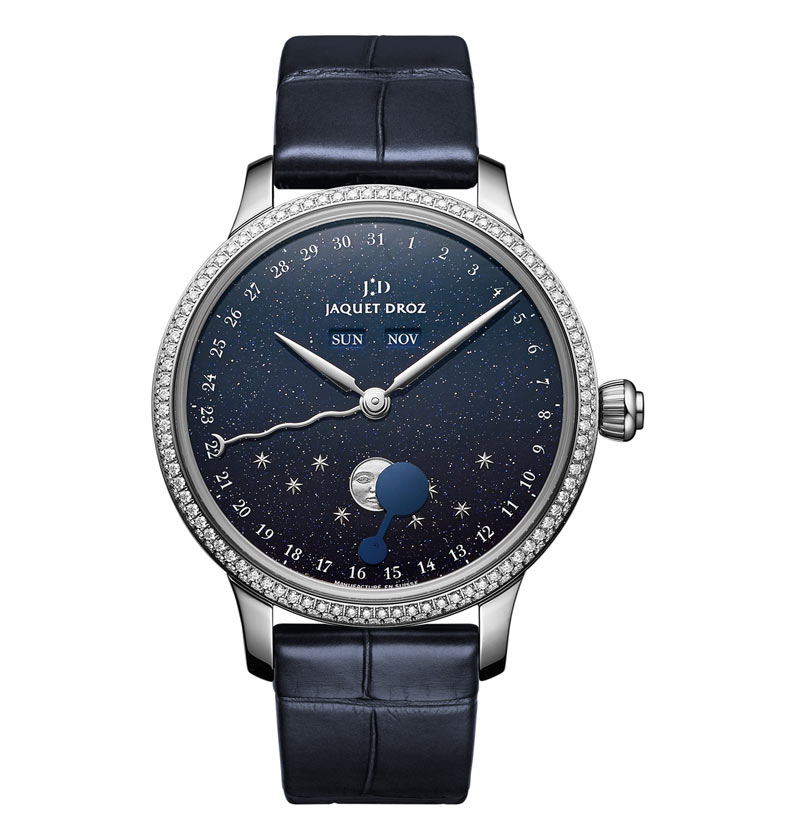 So now you know more about one watch-making important and beautiful complication: The Moon Phases.

Info sourced by the author for LuxuryActivist.com. Sources: Wikipedia, the above brands websites, Reddit, Forbes and Le Temps. All content is copyrighted with no reproduction rights available. Images are for illustration purposes only.

Ardbeg: A 200 Years Old Story Made Of Passion, Know-How And Fine Whisky

North to South: A resident’s guide to exploring Italy by luxury yacht charter