For this 27th year, the Salon International de la Haute Horlogerie (SIHH) will present several new interesting topics to note. For the past 27 years, SIHH has given visitors a 360° view of horological expertise. Spotlighting each brand inside a thoughtfully designed setting, it remains true to its fundamental vocation as an important and exclusive rendezvous for the sector. Visitors can discover the latest collections, meet other professionals, spot future trends, and exchange with the 17 historic Maisons and the new wave of independent artisan-creators inside the “Carré des Horlogers”.

Last year, 24 exhibiting Maisons were at the 2016 SIHH. This was one of the two major innovations at this 26th edition, which welcomed nine independent workshops and creators to join the 15 established Maisons that have made the SIHH the first key gathering of the watchmaking year. These nine contemporary brands, which these past years have imposed their own style and distinctive identity, exhibited in the Carré des Horlogers, an area adjacent to the leading names in the profession, to offer a broader outlook on Fine Watchmaking and the immense creativity for which it is known. In her inauguration speech, Fabienne Lupo, Chairwoman and Managing Director of the FHH, organiser of the SIHH, observed that

“The common denominators of all the Maisons at the SIHH are creativity, expertise, craftsmanship, excellence and the desire to achieve the impossible. Most of all, though, they share the heritage and longevity of an art that must continue to thrive.“

2016 was a tuff year for Swiss Watch makers. If we would summarize what happened this year during the 2 main watch trade-shows in watchmaking, SIHH and Baselworld, we can say that Swiss watch brands stood for innovation, differentiation and know how. While many brands are driving the cheap and safe route of mediocrity, Swiss watchmakers want to shine bright in the sky. In January, the SIHH brand exhibitors wanted to bring a strong statement about what they stand for. So several watch brands decided to highlight their iconic watches in order to remind the strong difference between standardization and unique craftsmanship. Last year during the 26th SIHH we saw amazing things. The Jaeger LeCoultre 85th anniversary of the Reverso, IWC celebration of aviator’s watch, Vacheron Constantin’s most complicated watch ever made or the amazing craftsmanship of Cartier’s jewelry in watchmaking. 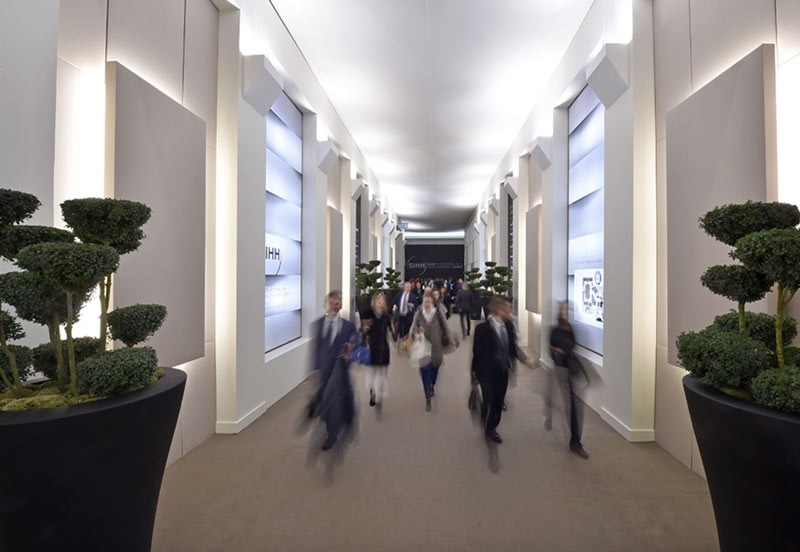 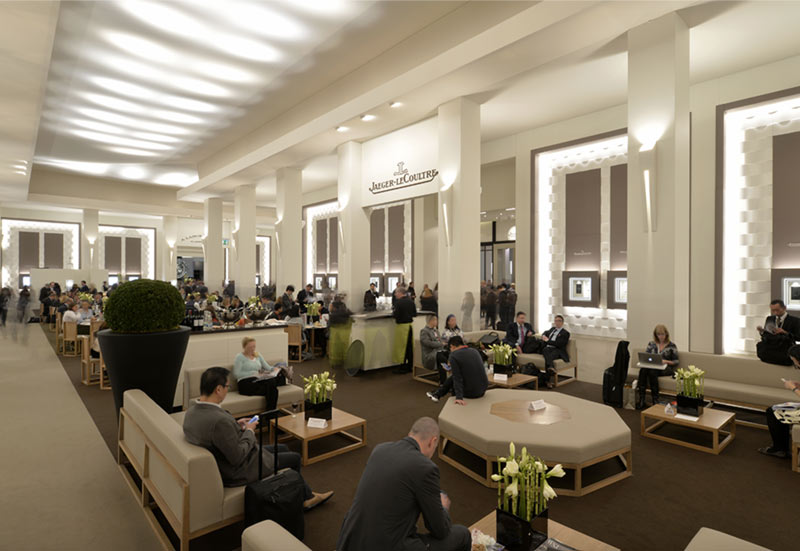 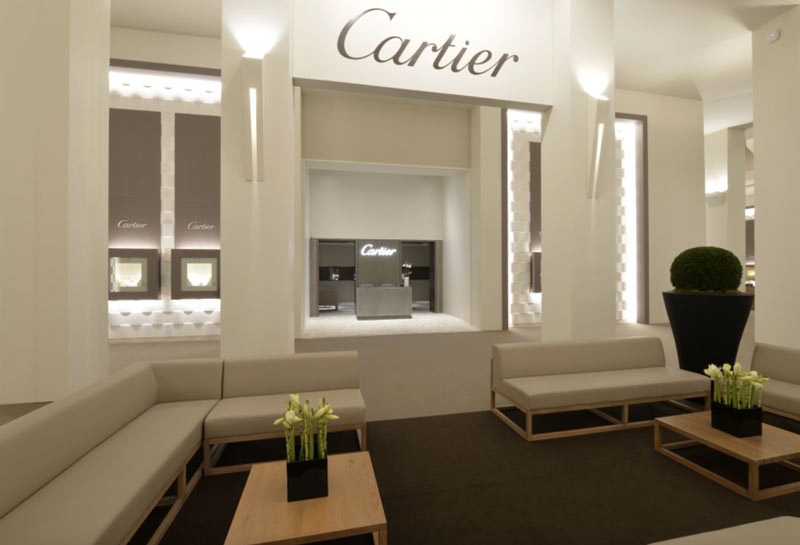 This year the SIHH will show case 30 Watch Makers, selected among the Creme de la Creme. Here is the full list:

With  this new edition we can see the return of Girard Perregaux and the arrival of Ulysse Nardin as main exhibitors. In parallel we see as well the arrival of 5 independent brands at the Carré des Horlogers. Bringing the total number of exhibitors as 30 Watch Brands. It shows that year after year, the SIHH is growing and attract more and more watch brands. Hosted in Geneva and at the beginning of the year, it also represent a great advantage to the commercial people that can already start making business from Day one.

Probably the biggest change is the open day to the public that will allow anyone to buy a ticket and visit the event. SIHH opens its doors to the public on Friday 20th January, between 11am and 6pm, subject to ticket availability. Here’s where you’ll find all the information you need to make the most of this exclusive day. Obviously there are some restrictions in terms of number of tickets.

Intended until now to be a private event for distribution professionals and the media only, the Salon will be open to the general public for one day. This is a first for lovers of fine watchmaking, who will have the chance to visit the SIHH on the Friday, the final day of the Salon. The exhibitors considered it essential to be able to reach an audience whose enthusiasm continues to grow – just like the Salon itself, which is reinforcing its reputation as the most important event in the Haute Horlogerie calendar.

One of the important new developments during this 27th edition of the SIHH, is the launch of the official mobile APP. It has been in the pipes for a while and 2017 will be the year of this important launch. The App was created as a useful pocket companion that should help you navigate within the SIHH show but also contains useful tips for your trip to Geneva. Professionals will have a dedicated section that will allow for example journalists to follow their own personal calendar of events, meetings, etc… You are able to connect with LinkedIn which will provide you extra functionalities to exchange and eventually find new business opportunities . 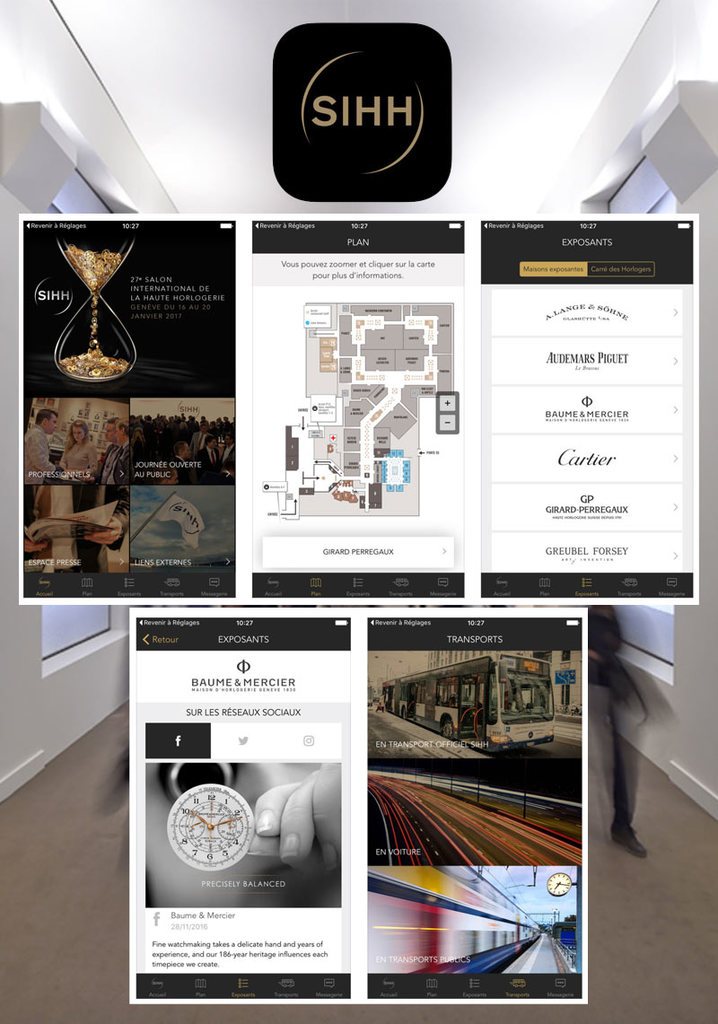 2016 is not over that some brands have released already their pre-SIHH 2017 communication. Here are some of the highlights, so you might be water-mouthring until January. 2016 being a modest year for Swiss watchmaking, brands will for sure capitalize on their strength and on their icons. We assume to see a SIHH that will be back to basics, presenting beautiful creations aligned with the air of times. 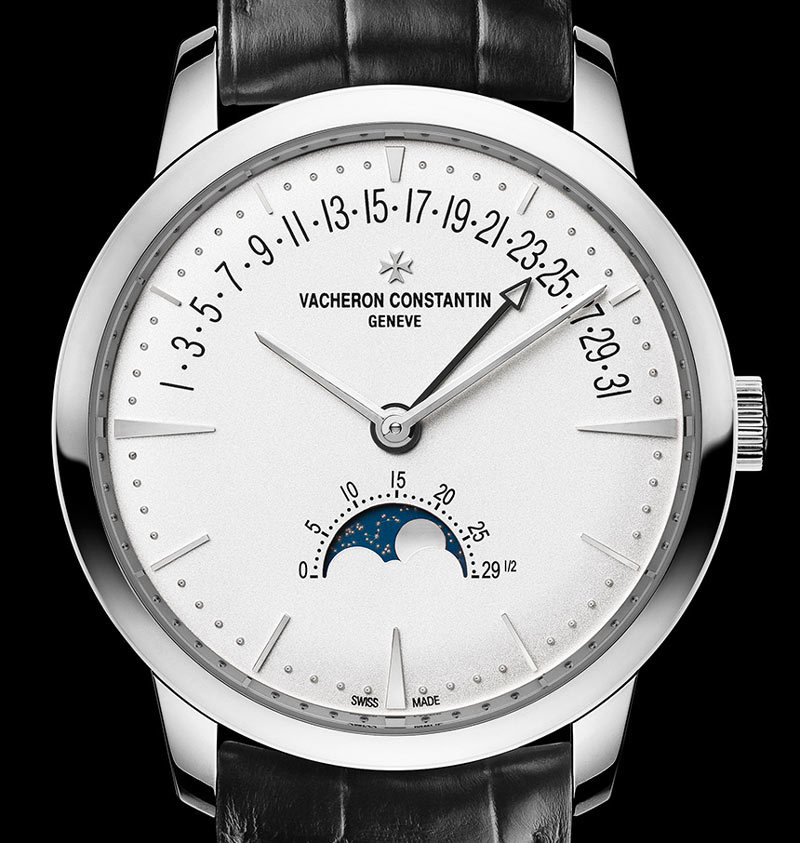 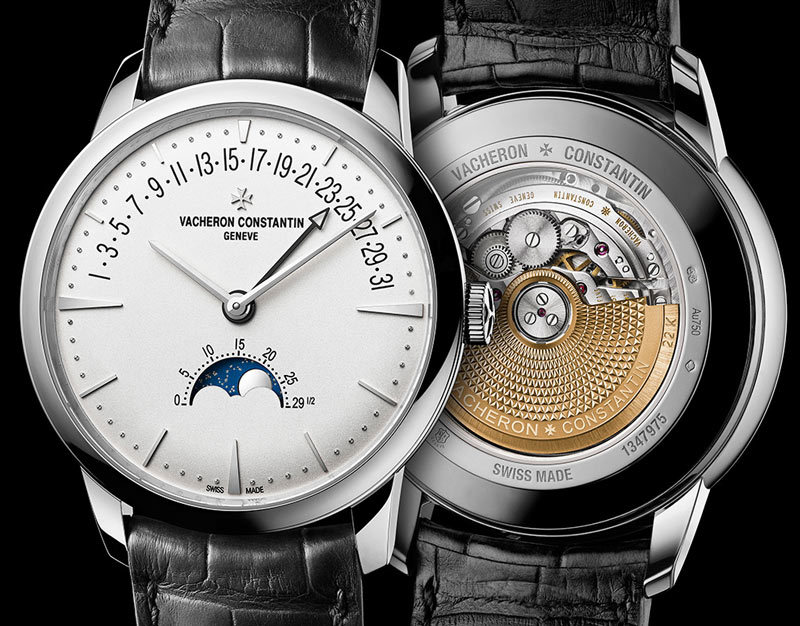 The Patrimony collection reflects all the know how of Vacheron Constantin. The new Vacheron Constantin Patrimony Moon Phase Retrograde Date watch aligns perfectly within this collection, It is a 42.5mm watch case with just 9.7mm thick. The Moon Phase complication is so accurate that you might loose only 1 day in the next 122 years, which means it will not be you the person to modify it. The watch comes with the in-house movement 2460 R31L that you can admire from the sapphire back-case. 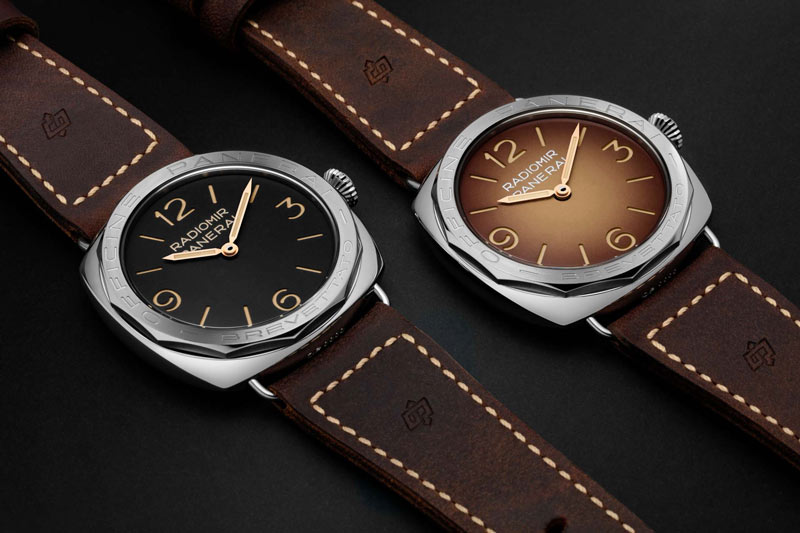 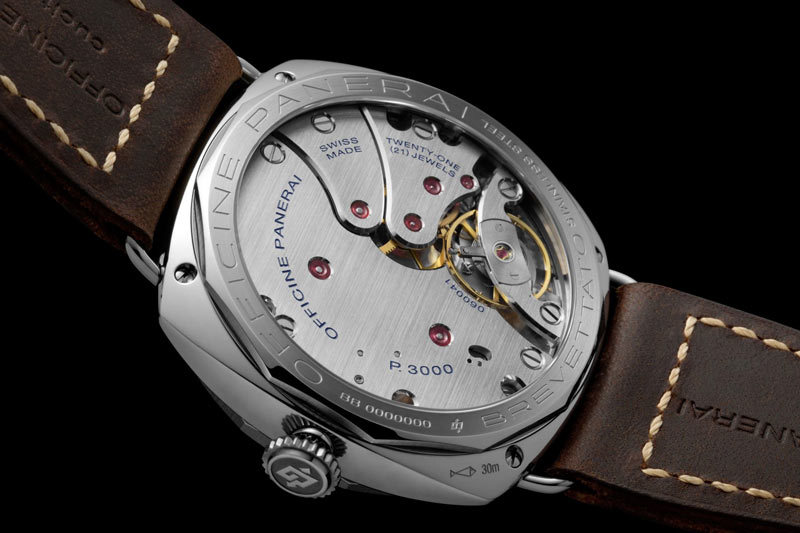 The Radiomir watch is one of the biggest iconic watches in the all watch industry. Its unique and bold design brings a true identity to this watch. It was back in 1935 when Panerai started its cooperation with the Italian Navy and supplied precision pocket watches that was especially designed for military use. From 1936, the Italian Navy commissioned Panerai to work on a diving watch that could resist anything due to intense use. 2 years later, 1938, the first Panerai Radiomir were produced. The name Radiomir comes from the luminescent product used in the dial – Later Luminor – that allowed an improved visibility of the dial under water. The legend was set. The 2017 edition celebrates the uniqueness of the Panerai Radiomir and brings to the fans this vintage look that is very “current” in a way. 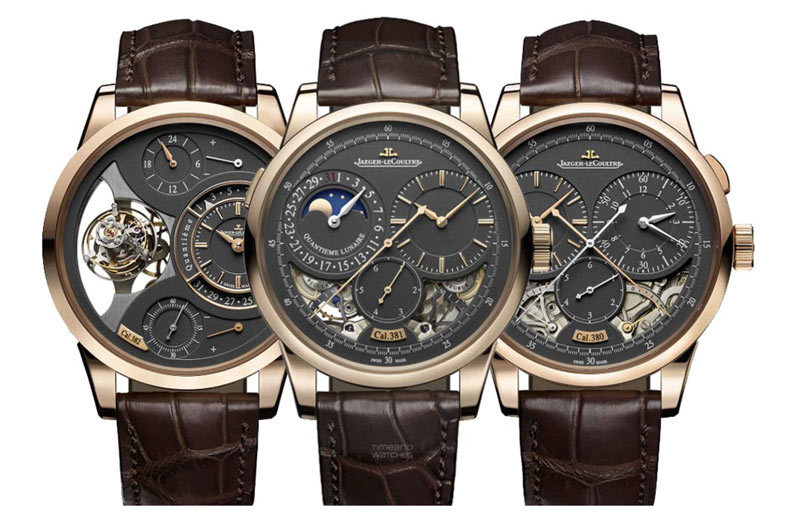 The Duomètre collection is a well established watch line within Jaeger LeCoultre portfolio. During the 2017 SIHH, the Swiss brand will reveal 3 new interpretations of the Duomètre Sphérotourbillon, Duomètre Chronographe and Duomètre Quantième Lunaire models, all of them characterised by a magnetite grey dial with an opaline finish framed by a 42 mm pink gold case. With the Duomètre, Jaeger LeCoultre resolved a longtime problem in watchmaking. Basically, any complication added to a watch uses up some power provided by the barrel. Obviously this energy consumption can have significant implications in the accuracy of the watch. The clever approach is what Jaeger LeCoultre call the Dual-Wing. They separated the energy. The basic functions (hours-minutes-seconds) have its own movement and the extra complication will have its own power source as well. To make a long story short: the watch has 2 movements. Clever.

2017 SIHH is getting ready. All eyes and ears will be focusing on this 27th edition. You can visit the official website of the event here: https://sihh.org. It will be the first big watch event of the year and we will be able to feel how the year is going to be made of. Will watch buyers be confident in the future or conservative? Only the new year will tell us.

Info sourced at SIHH official communication release – https://sihh.org – and respective Brands pre-basel information. All content is copyrighted with no reproduction rights available. Images are for illustration purposes only.