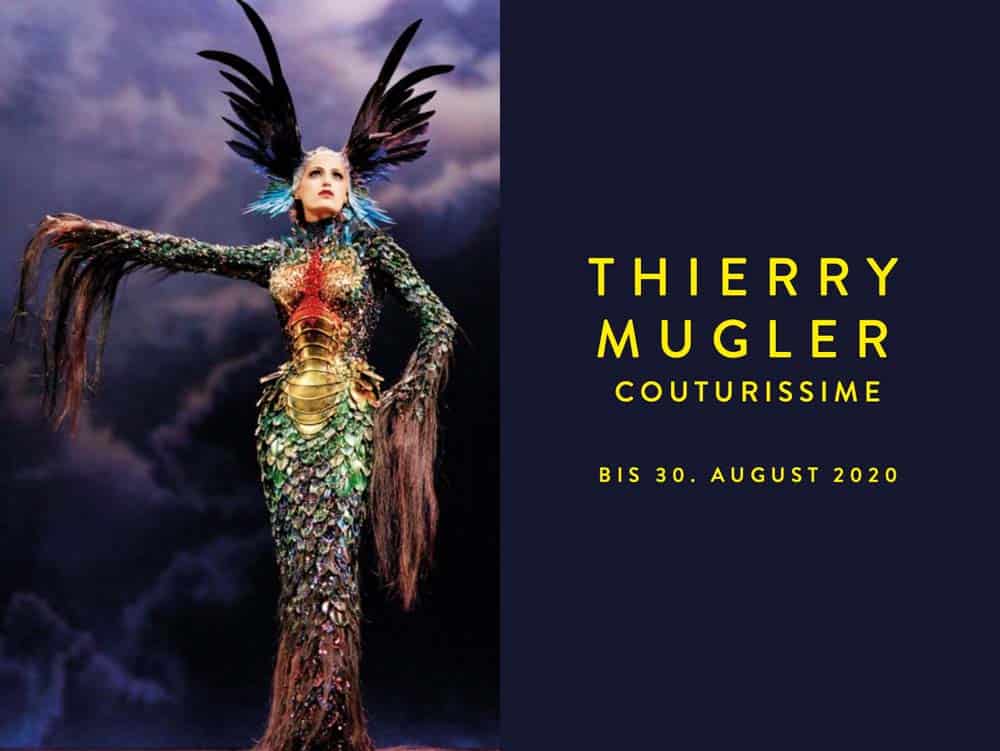 Thierry Mugler is one of the most gifted artists of his generation. He was a tornado in the world of fashion. There was a before and an after Thierry Mugler. He redefined all the standards and took the fashion show to a “out-of-this-world” level. A roadshow called Thierry Mugler Couturissime was created a couple of years ago and is traveling around the world in order to celebrate the iconoclast couturier Thierry Mugler. This summer, the exhibition is installed in Germany at the Munich Kunsthalle.

Thierry Mugler: Couturissime presents 150 haute-couture and prêt-à-porter outfits by a visionary couturier, director, photographer, perfumer, and dancer – almost none of which have ever been exhibited – in addition to accessories, stage costumes, videos, rarely seen sketches, and archival material. Numerous art prints by leading fashion photographers round out the show. From May 25th to August 30th, 2020.

This spectacularly staged retrospective presents the multifaceted work of this visionary couturier, director, photographer, and perfumer. It showcases more than 150 haute couture and prêt-à-porter outfits, stage costumes and accessories, videos, photographs, design sketches, and archival material created between 1977 and 2014. Some 100 works by famous fashion photographers who have staged Mugler’s creations, from Helmut Newton (1920–2004) to David LaChapelle (*1963), round out the exhibition.

With tendencies toward the futuristic, Mugler experimented with avantgarde techniques and materials – including (acrylic) glass, PVC, faux fur, vinyl, latex and chrome. His broad architectural silhouettes have made their mark on the history of fashion. To this day, Mugler continues to influence an entirely new generation of up-and-coming couturiers

“My only measure is excess” – Thierry Mugler

End of the ’70s, New York and Milan were the coolest places for fashion, and Paris was dying, sinking into the sands of its glorious past. The Chambre Syndicale de la Haute Couture was deeply looking for a renouveau. At the end of the 80’s it opened its doors to a few talented young gunners and Thierry Mugler was one of them.

During the 1980s and 1990s, Thierry Mugler became an internationally recognized designer, and his collections garnered much commercial success. At the request of the Chambre Syndicale de la Haute Couture, he completed his first haute couture collection in 1992. In the same year, he launches his signature fragrance: Angel that changed completely the face of perfumery in the world.

Mugler’s creations have been worn by stars like Diana Ross, David Bowie, Lady Gaga, Céline Dion and Beyoncé, and captured on film by masters of fashion photography like Helmut Newton, Ellen von Unwerth, and Pierre et Gilles. With his penchant for theatrical performance, Mugler has created some of the most spectacular fashion shows of his time.

With around 350,000 visitors every year, the Kunsthalle München is one of Germany’s most prestigious exhibition houses. Located at the heart of Munich, the Kunsthalle stages three large exhibitions a year on a variety of themes. Equipped with state-of-the-art museum technology, the approximately 1,200 m2 exhibition space is a respected platform for artworks representing a variety of genres from painting, sculpture, graphic art, photography and crafts, through to design and fashion. The Kunsthalle München’s diverse programme alternates monographic exhibitions with thematic projects, yet also includes interdisciplinary concepts.

When I used to work with Mr. Mugler, there was one thing that always stroke my attention: the fact that we could permanently see the fire of passion in his eyes. For everything, he brought to the fashion industry, and for all the inspiration he represents for future generations of fashion designers, he deserves this retrospective. If you plan to spend in Munich, do not hesitate to visit the Kunsthalle. You will be amazed by this extraordinary of one of the most gifted fashion creators of all times.

Mugler Angel Nova: An Explosion For The Senses

Thierry Mugler And The Legacy Of A True Artistic Revolution

﻿Why Aura Mugler is a great Mugler?