The luxury industry in China is like a roller-coaster. Sometimes we go up, sometimes we go down and sometimes things are upside down. In 2015 the Chinese market represented 20% of the global luxury business. This means $17.2 billion. Wealthy consumers (with an average income superior of $300’000) accounts for a large majority of the luxury consumption. There are 78 million households in China considered as upper-mid-class that counts for 20% of luxury purchases. This number is growing which means that despite the crisis, there is a strong potential for big sales.

With the development of Chinese luxury customers, these people get more and more educated and their aim for luxury status symbols generates new opportunities for new segments like Jewelry and women’s apparel. 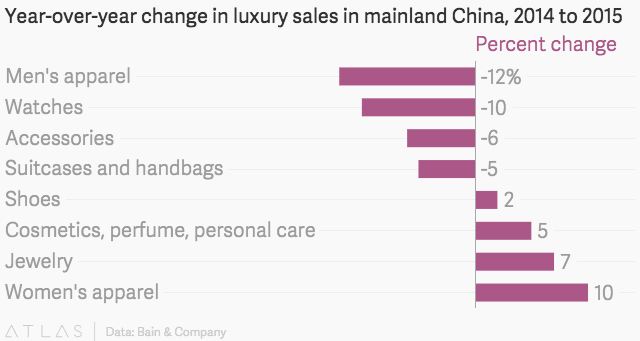 When we analyse luxury segment by segment, we can see that sales for men’s apparel, watches, accessories and suitcases have dropped between 2014 and 2015. Nevertheless, shoes, cosmetics and perfumes, jewelry an women’s apparel are growing. The overall evolution of the Chinese luxury market is -2% between 2014 and 2015. Compared to other countries, the Chinese growth is still superior to others.

With the great opportunities that the Chinese national market represent, several international luxury brands have placed a lot of their businesses there. China represent 20% of the total Swatch revenue. The following chart shows the 11 brands which have the biggest share of revenue in China mainland. Companies like Louis Vuitton, Burberry, Hermès or Prada have invested several millions of US dollars to develop their own retail network. Louis Vuitton has more than 30 own stores disseminated over the country, from Shenyang, to Shanghai, Zhengzhou or Wuxi Yaohan.

The number one city, Shanghai, has more luxury brands established there than any other city in China. If we check where people would go in Shanghai to buy luxury items here are the top 3 best places for luxury shoppers: 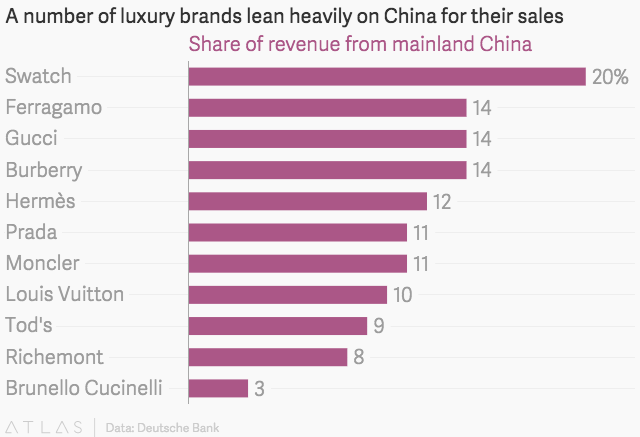 Chinese people are traveling more and more and they use these travels to buy luxury. In Japan, the luxury business growth done by Chinese people went +252% in 2015. This number is +31% in Europe and 33% in South Korea. So if you add all Chinese purchases in China and abroad, the share of revenue done by them represent half of the total sales of Swatch group (49%), Richemont has 41% and Hermes has 31% of their total revenue done by Chinese people worldwide. You can ask to any luxury store in the main world capitals, they will all say that their best customer are Chinese. In London, each Chinese tourist will spend around $2’800 per visit. The main reason why they buy abroad is price. Hefty import tariffs and consumption taxes, as well as higher pricing strategies, can increase prices in China to 50% more than a shopper would pay elsewhere. A Louis Vuitton handbag costs 30% more in Beijing than in Paris. A guarantee of authenticity is another reason why the Chinese prefer European or American stores over their own. 42% of the total amount of detaxes after luxury sales in Europe are done by Chinese tourists while traveling.
For sure Chinese luxury customers have their own habits and their approach of luxury is evolving very fast. If we pay attention to the most preferred luxury brands for Chinese you will be surprised to know that Apple arrives number one far bigger than Chanel, Louis Vuitton or Dior. In the chart below, you can see the share of millionaires per brand (source: Statista).

In 2014, Apple was not even in the top 10. In one year, the tech-company was designated as the best luxury brand in 19% of the millionaires in China. This means that the Chinese luxury customer has a modern vision of luxury, less anchored into the sands of the past. For a Chinese customer, the iPhone or a macbook is truly a luxury product that would differentiate the owner from the others. The sex-appeal of Apple generates a great enthusiasm that fans might have. With an ambition of getting a more western lifestyle, certain brands like the American ones, get more attention. Of course, Apple became a global massive giant in terms of communication and image. With $ 2Billion of budget for communication, the Cupertino brand can basically do whatever they want.
LA

Info sourced at atlas.qz.com, KPMG, The Global luxury book, Adweek and wikipedia. All content is copyrighted with no reproduction rights available. Images are for illustration purposes only.