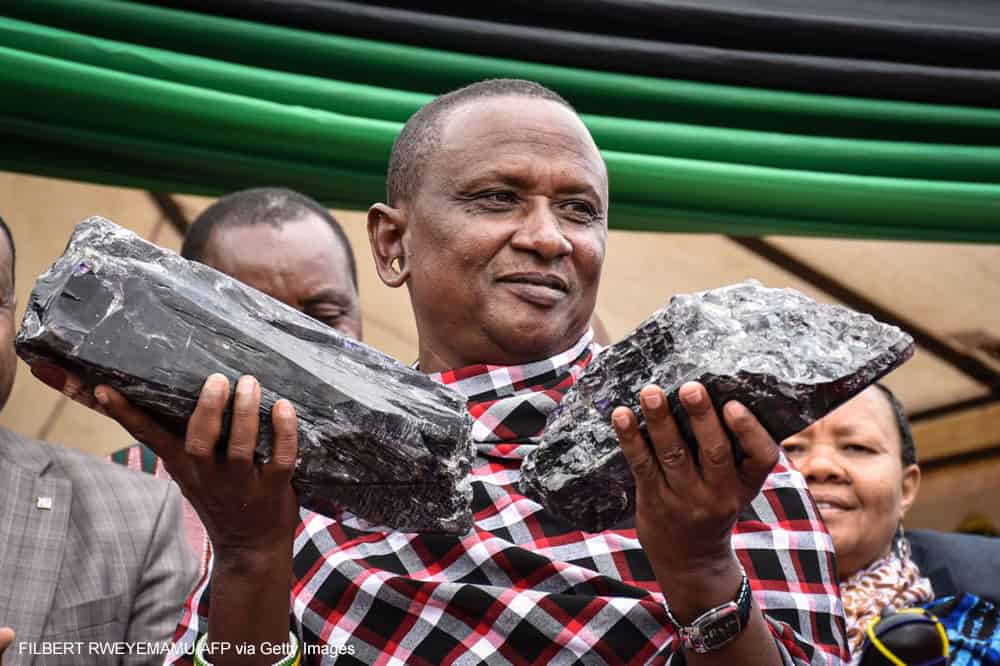 This month, the jewellery industry got hit by an exciting wave. 52 years old miner, Saniniu Laizer, has realized the dream of many miners: to find richness in the darkness of a mine. Mr Laizer found the largest tanzanite stones ever seen for a total value of USD 3.4 million. With this discovery, Mr Laizer will for sure change his life and might not need anymore to go down the mine for the rest of his life. With intense blue colour, Tanzanite is one of the rarest gemstones in the world and therefore one of the most expensive gems. Many experts believe that within the next 20 years, Tanzanite will be over from Earth, which means that this 15Kg discovery is one of a kind.

Saniniu Laizer, The Hero Of The Day

This will be a day to remember. When Saniniu Laizer discovered the 2 Tanzanite stones, he could feel his heart racing in his chest. He knew that from that day his life would change forever. Mr Laizer is a small artisan miner and he is part of the Masai community of Lake Manyara in the Simanjiro district. He is 52 years old, he has 4 wives, 30 children, and two thousand cows. When interviewed by the BBC he declared that it was a very special day for him and that he would kill a cow to celebrate. We know that when a Masai kills a cow it is definitely a very big deal.

This amazing discovery was very well received by Tanzania President John Magufuli. He has been governing the country for more than 5 years and he is very strict when it comes to the minor sector. Since he was elected, he has protected the country’s interests against any sort of foreign multinational exploration. He even changed legislation by increasing royalties from 4 to 6%. Let’s note that Tanzania has a lot of richness in its ground. From Gold, Diamonds, Tanzanite, and even Uranium, the African country wants to better defend its wealth and better manage the richness of the mining sector in order to develop and improve society.

Mining activities accounted for 17% of the East African country’s GDP in 2019. Magufuli’s administration has imposed reforms that seek to curb smuggling and increase revenue collection in the sector.

Saniniu Laizer also said to the BBC that he plans to reinvest the money in his community. according to the rich miner he wants to build a shopping centre and a school. He might create many jobs for his community and provide a better future for the children. Tanzania’s government bought the book-sized stones weighing 20 pounds (9 kg) and 11 pounds (5 kg) from miner Saniniu Laizer for $3.4 million. Minerals Minister Doto Biteko said on state television Wednesday the government is buying the rare minerals for preservation.

Tanzanite is the blue and violet variety of the mineral zoisite (a calcium aluminium hydroxyl sorosilicate), caused by small amounts of vanadium. Tanzanite belongs to the epidote mineral group. Tanzanite is only found in Tanzania, in a very small mining area near the Mererani Hills.

The gemstone was given the name ‘tanzanite’ by Tiffany & Co. after Tanzania, the country in which it was discovered. The scientific name of “blue-violet zoisite” was not thought to be sufficiently consumer-friendly by Tiffany’s marketing department, who introduced it to the market in 1968. In 2002, the American Gem Trade Association chose tanzanite as a December birthstone, the first change to their birthstone list since 1912.

Tanzanite was formed around 585 million years ago during the mid-Ediacaran Period by massive plate tectonic activity and intense heat in the area that would later become Mount Kilimanjaro. The mineral is located in a relatively complex geological environment. Deposits are typically found in the “hinge” of isoclinal folds.

According to Mr Tobias Kormind, Managing director of jeweller 77 Diamonds, this Tanzanite discovery is a major event in the jewellery industry. Here is his comment as a well known worldwide expert:

“Tanzanite is the only very fine deep blue colour gemstone besides blue sapphire in the world and it is only available in one place, making these record-breaking hulks of tanzanite a hugely important discovery. It’s fantastic for the local population because the news has already attracted the attention of international gemstone buyers and the stones need to be cut before being exported, so this will create local manufacturing jobs. These enormous stones will either end up on jewellery or be sold as mineral specimens. The better formed the specimen, for example, if it has a beautiful geometrical pattern and an unbroken surface, the more collectors will be prepared to pay for it.”

Mr. Kormind, kindly accepted to provide us with an exclusive interview that you can read here.

In Conclusion, this discovery has a tremendous impact. Not only the life of Mr Saniniu Laizer will change forever, but it also allows us to show the rarity of certain natural resources. Tanzania is a good example of managing their wealth, not all countries are that good. Let’s hope the 15Kg of Tanzanite will procure good for those who will be able to benefit from it.

Top 7 Luxury Brands That Are Worth Your Investment