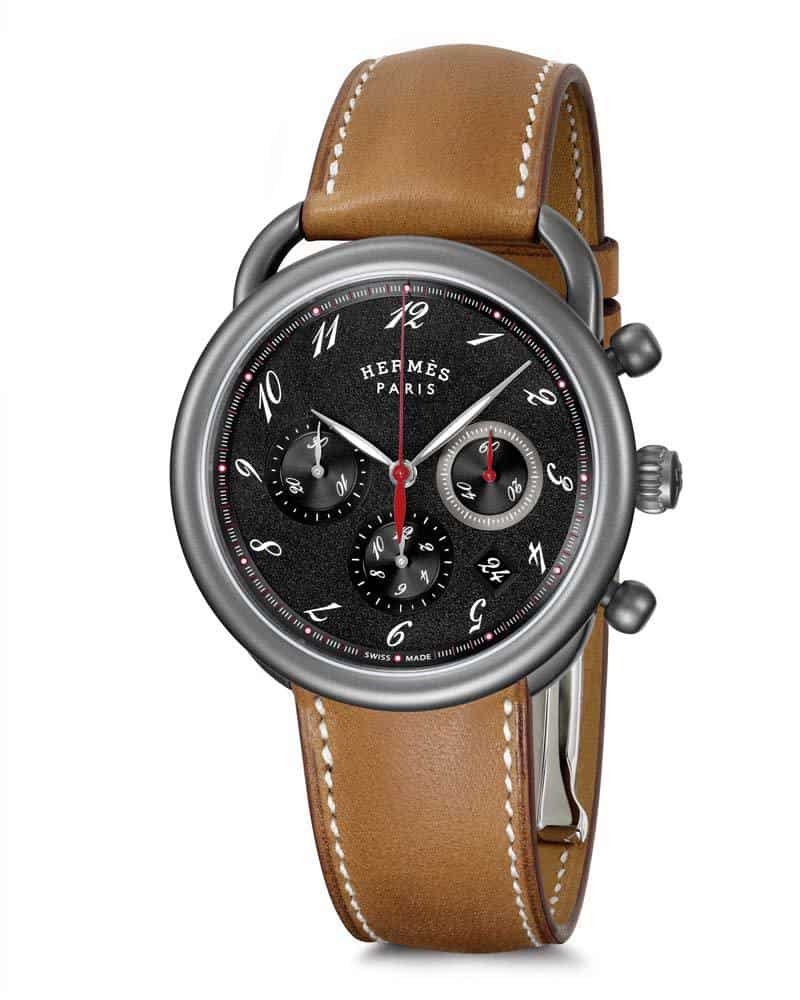 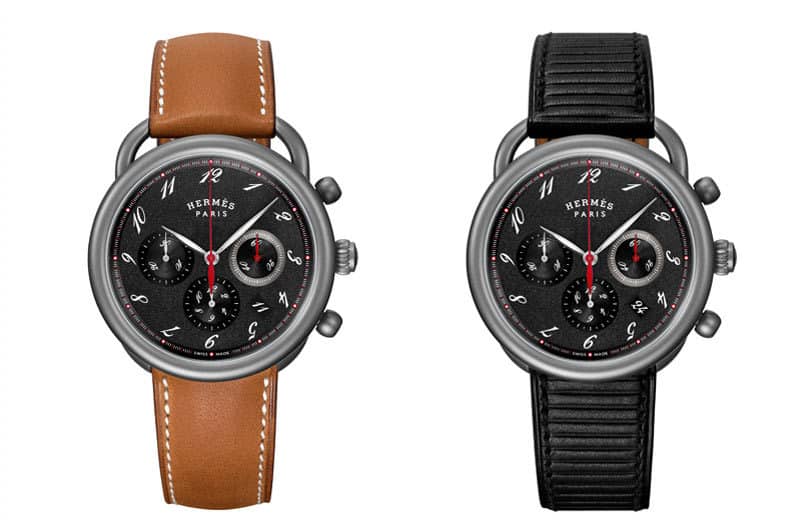 The 2018 edition of SIHH will be very interesting as there are big positive changes. New brands are joining and one of them is Hermès. After several years in Basel, Hermès has decided to join Geneva and the Salon International de la Haute Horlogerie. We welcome Hermes and are thrilled to share here a first hint of what is coming in January. The first open window to what Hermès will reveal at its first participation to the Geneva trade-show is the new Hermès Arceau Chrono Titane.

Hermès Arceau, a poetic story since 1978

Hermès and watchmaking is a long passionate story. Founded in 1837 by Thierry Hermès, the French luxury brand immediately made its name as one of the most high-end equestrian manufacturer for the wealthy and the major Royal courts in Europe. Already in the 1910’s, Hermès started commercializing watches that had already the Hermès philosophy and this only got stronger and stronger along the decades. In 1978, Henri d’Origny, Hermès iconic artistic director, designed the Arceau: a round watch that associates asymmetrical lugs featuring a shape inspired by stirrups along with a distinctive and singular font. D’Origny spent many years designing scarves and ties — he even designed the first printed necktie for the company, although, as the legend goes, Hermès first introduced ties to its Cannes store because the neighbouring casino wouldn’t admit gentlemen unless “properly attired”.

“I have worked exclusively for Hermès since 1958. I was just out of military service and wasn’t sure how to employ my talents. I was doing some illustrations for children’s books when I bumped into an old friend from boarding school who happened to be a member of the Hermès family. He set up an interview for me with his father and his uncle, and the rest is history.” – Henri d’Origny, Hermès Artistic Director.

In the ’70s, the company decided to formalise its watch business by setting up a factory in Bienne at the foot of the Jura mountains in Switzerland. D’Origny was drafted in and, despite having no knowledge of horology, he designed what was to be the first iconic Hermès watch: L’Arceau. Since then, interpreted through countless evolutions and variations, the line has been perpetually renewed while remaining true to its original spirit.

In 2018, Hermès will have a 40 years of heritage in the Arceau and even 4 decades later they are still innovating the range with the addition of a new Hermès Arceau Chrono Titane. What do we know so far?  Equipped with a chronograph function and a 41 mm beadblasted titanium case, this sportier version radiates an appealingly light air. The numerals give the impression the dial was blown away by a strong dynamic wind. The three counters and the date are harmoniously arranged. Aesthetic characteristics inspired by saddle- making are showcased on both models, tted with a natural Barenia calfskin strap, or with a black embossed Barenia calfskin strap, on which the saddle stitching and inimitable feel testify to the tradition of leather- making excellence cultivated by the Maison.

“I took up my compass and a sheet of paper and came up with L’Arceau [named after the hoop-shaped part of a stirrup],” he explains. “In my time I have designed so many different things, from cutlery to scarves, but perhaps watches have proved to be the most interesting, because you have to work alongside other specialists. It isn’t a solitary pursuit.” – Henri d’Origny, Hermès Artistic Director.

What do we like about the 2018 Hermès Arceau Chrono Titane? 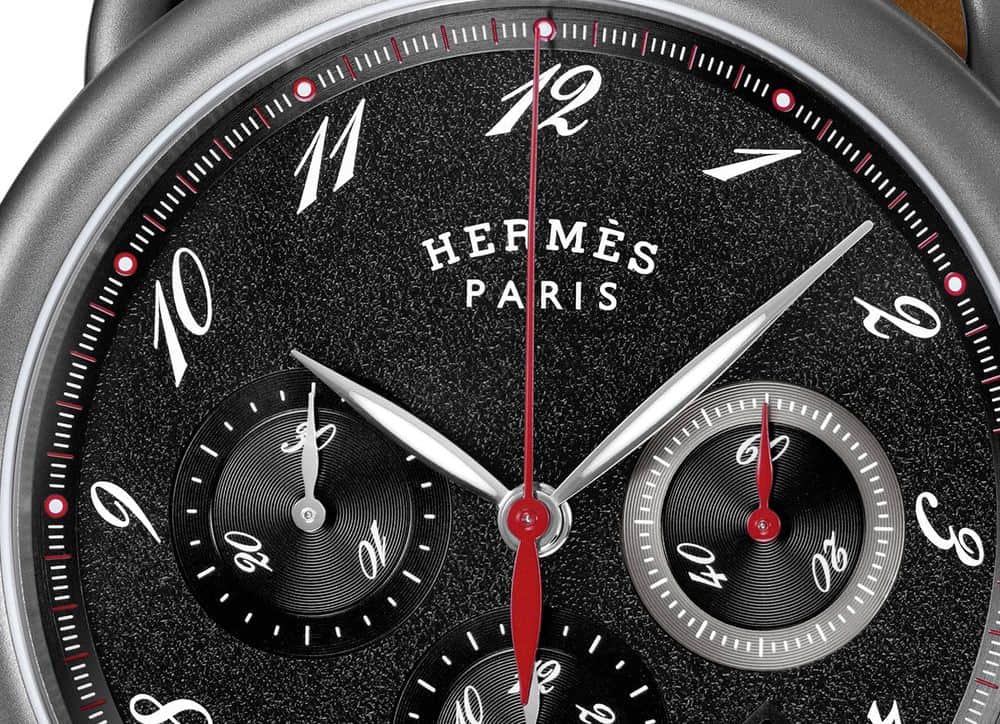 First of all, it is a Hermès watch, this means that this watch is a great piece of Swiss watchmaking. Technology and complexity are made simple and minimal to the eyes of the watch owner. The new Arceau Chrono Titane keeps the original design made by Henri d’Origny and underline a more sophisticated approach with the addition of a Chrono and the Grade 2 Titanium 41mm case . The dial is amazing. Hermès has been developing a tremendous know how in terms of dials, some of them being unique. Here we can see an interesting galvanic black treatment providing a modern, almost technical look.

This model will for sure be considered as the “large model” in the Arceau range. The dial, as often with Hermès, is very elegant with subtle details. One interesting detail in the dial, a part from the Chrono functionalities, is the date window. It is placed between four and five o’clock, which makes it a bit unusual. Hermès is very strong in shifting details around in order to create an unique look. 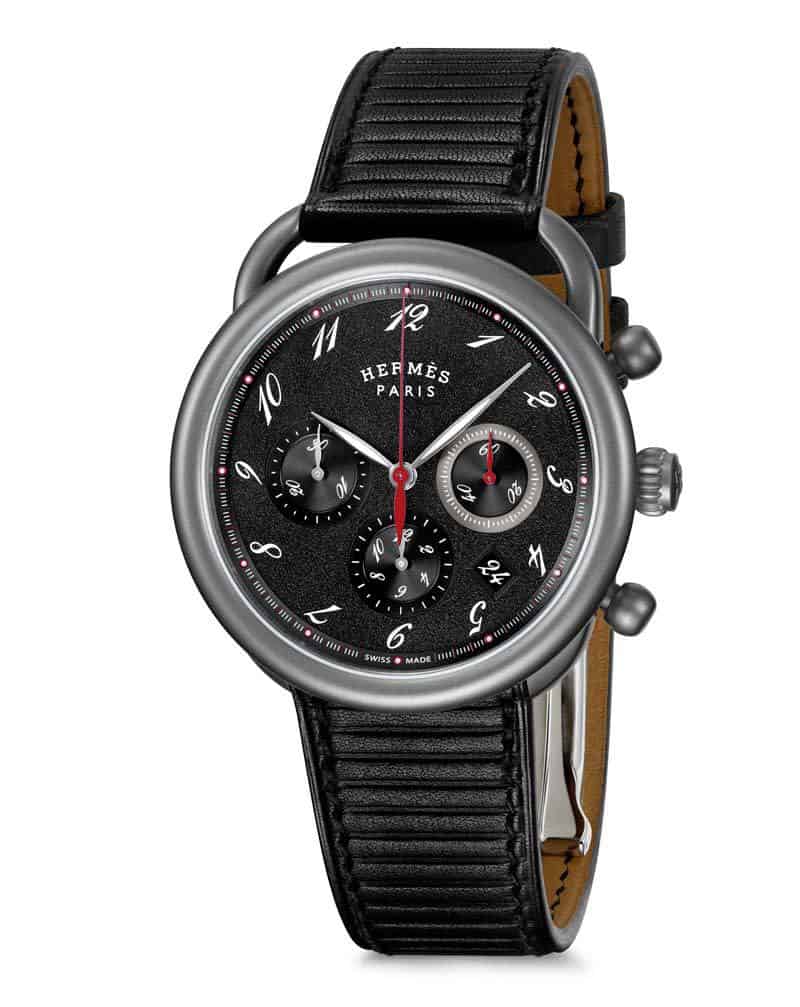 2018 is going to be a very interesting year for watch-making and for the incoming SIHH. With new brands like Hermès joining the January party, this is going to allow a stronger kick off next year. Do not hesitate to connect to the official brand website to learn more about this amazing brand:
http://www.hermes.com