Jean-Paul Gaultier brought an idea of impertinence to the fragrance industry. With the 2 pillar creations as Jean-Paul Gaultier Le Male and Le Classique, it opened a new route for fragrance creation that would not follow the standards. From an olfactory point of view as well as from a flacon and outer-packaging perspective, Jean-Paul Gaultier changed the traditional codes of luxury by creating new icons. With the launch of Scandal Eau de Parfum, the French brand tried to create a third pillar, which they have been falling to do since the mid-90’s. Jean-Paul Gaultier Scandal? Not really. And this is why.

The life of Madame la Ministre: sex and politics… pfff!

The new fragrance tells the story of a woman who has a double life. During the day she works in the French government and in the evening she has an intense life, openly sexual. She is a woman with strong power: politics and sex. Not sure how attractive this story is. In one side, everybody is tired about the “behind the scenes” of politics with corruption, sex stories and robery. Nobody finds Polititians exemplary and probably it is even boring. In the otherside, by investing the universe of Pigalle, Jean-Paul Gaultier could have written a true nostalgic story of this area, with all the dirty secrets and glitz you can find. By putting on stage this caricatural portrait of this woman, the story is not very exciting. Why? Because we are missing the subversive aspect of it. Jean-Paul Gaultier always provided a second lecture of its images which we do not have here. Where is the scandal really? We would have expected a more impactful concept and story-telling. One that only Jean-Paul Gaultier would dare. So the Scandal seem a candy fairy tale that would not excite a thing. Madame la ministre, pff!

The flacon, a pair of legs and the name… quite a scandal? LOL.

Looking at the flacon, we can see there is a qualitative work in terms of glass weight, finishes and the flacon cap is done in a very nice way. It is quite pleasant to manipulate it but only the cap seems original, the flacon itself seems “deja-vu”. Nevertheless, it underlines the caricature of the situation, a certain femininity very close to a cliché that we might confess is quite boring. The outer-packaging takes the codes of the aluminum can, an iconic symbol of Jean-Paul Gaultier fragrances. So not much novelty here even if there is a positive aspect by keeping the alluminum can as a brand signature. With Scandal we would have expected something sharper, a true creative and audacius detail. The quality of materials and details were taken care of but we would have expected a certain edge. 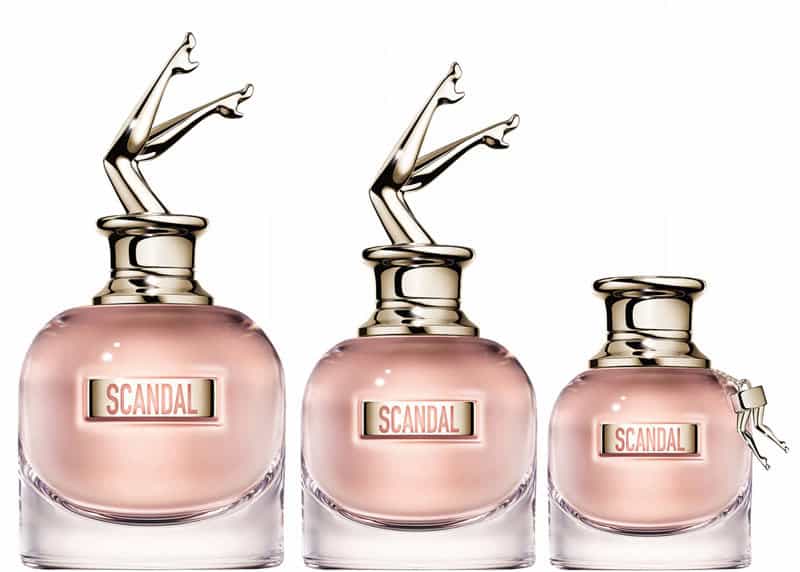 The fragrance is not really a scandal neither

By analysing all Jean-Paul Gaultier female fragrances, we can say that a common denominator is white flowers. It is by far the most predominant floral notes in 25 years of the brand perfumery creation. From the Orange blossom and Jasmine in Le Classique, to variations in Gaultier2 and MaDame, Jean-Paul Gaultier Scandal follows this path by proposing a modern version of more classical structures. In Jean-Paul Gaultier Scandal, we have Gardenia. By combining Gardenia and Patchouli, the French brand thought they would bring a certain sexiness into the olfactory creation. The structure places this fragrance as a modern Chypre but remains less sexy and feminine than the previous 3 creations. Is this a Scandal that we will remember? Not so sure. In a society made of reality shows, Miley Cyrus, Lady Gaga, the Kardashians and other girls trying to buzz and get into the scandal business, this story is quite soft…

In the first minutes…
When the fragrance is sprayed on a paper blotter, the immediate surprise comes from the fact it is a very fruity fragrance. There is a green aspect that brings lots of cleanliness and brightness. On skin, it is a different game. We still have the fruity notes but the Gardenia blooms strongly and provides a much intense femininity. We start seeying a distinctive honey note bringing a sensual feeling of warmth.

After a couple of hours….
The paper blotter is less fruity green and develops towards a milky powdery Gardenia and a clear honey note. We sense some woods but still quite bright and clean. On skin now the Gardenia is balanced with a strong woody and honey notes. Patchouli procures a Chypre modern impression while honey is wrapping the fragrance in a warm wave of scent. The fragrance is quite strong and it stays quite well on skin from a trail point of view.

From an olfactory point of view, Jean-Paul Gaultier Scandal is definitely not a scandal. In the modernization of Chypre, Coco Mademoiselle and Narciso Rodriguez seem more interesting fragrances than this one. We would have expected from Jean-Paul Gaultier to dare a higher risk, to dare the scandal. So unfortunately nothing new. Pigalle should have represented an endless olfactory universe in which a certain dirtiness would blend along with make-up and cologne. In our opinion the honey note is too clean. Usually honey is part of animals notes but here it is used in a quite clean way, like a bee-wax impression. By using a more animalic honey note, this would have brought the sexual effect that is currently missing.

“Thought you would date a naughty girl? Well, meet the preppy-bourgeoise”

Madame la Ministre is safe with this fragrance that will not reveal any of her “secret” activities. We thought we would have a date with a naughty girl and we ended up with the preppy bourgeoise. Probably it will be better next time.

The advertising? Between the cliché and the caricature

The advertising shows the life of this polititian woman. a minister in power (Madame la Ministre). She has a second life during the night. After Dominique Strauss-Khan or even Bill Clinton the Jean-Paul Gaultier story seem almost like a pinky-cheesy dream. We are far away from all the subversive stories of Opium by YSL, Obsession by Calvin Klein, Poison or even Pure Poison by Dior. It remains a soft dream, probably keeping the fragrance launch in a safe area.

To Conclude about this Scandal…

There are 3 major launches this year in the perfumery market; Gabrielle Chanel, Aura Mugler and Jean-Paul Gaultier Scandal. From these 3, we found Gabrielle Chanel and Aura Mugler much more interesting as fullfilling the role that we expected from a new fragrance of these respective brands. Jean-Paul Gaultier is expected to be subversive, second degree and with a hint of humour, like LeMale and Le Classique are. Playing with the limits of our imagination, Jean-Paul Gaultier always enjoyed to deliver a strong portrait of women and men. Despite of all the “clin d’oeils”, Jean-Paul Gaultier stayed at the level of caricatures. Here with Scandal we are completely in a childish fairy-tale. Actually it would have been the perfect Cacharel. Probably if this fragrance was launched during the scandals in France about ex-president François Hollande and his mistress, it would have given to this new launch a bit of context. Now, several years later, it seems more a soft vision of the past, something we all know, rather than a story that we could project a possible future. There are brands that hit the market so perfectly with their first signature fragrznces that it is hard to get away from it. Jean-Paul Gaultier defined its brand by Le Male and by Le Classique. Is there something else to be said? Time and sales will prove if this is right or wrong.

Info sourced in product testing by luxuryactivist.com, sephora.com, WWD, The brand website, Fragrantica and wikipedia. All content is cooyrighted with no reproduction rights available. Images are for illustration purposes only.