The Perfumery market with more than 1’000 launches every year became a very competitive and tough market to work on. Some brands outstand more than others, especially those who take risks and truly innovate. J’Adore was for sure, back in 1999, the last daring blockbuster creation of the fragrance and luxury house. Now, almost 20 years after the launch of J’Adore, Dior announced the launch end of August of a new big feminine fragrance, described as a new chapter in the company’s history. The fragrance is called JOY and at LuxuryActivist we feel it was not a good thing to acquire this name from Jean Patou. By trying to rewrite history, Dior forgets about the tremendous richness of the brand and not sure this will bring them luck. There are certain things that should not be done. The French brand already revisited history a couple of times, here is a quick flashback.

One of the founding fragrances of the “Après-guerre” was Miss Dior, now called the Miss Dior Originale. Launched in 1947, Miss Dior was the symbol of a positive renewal. The world was devastated by the Second World War and Christian Dior wanted to bring a positive and optimistic vision of the future. This signature fragrance for the luxury house was born in the “New Look” era and represented the extreme elegance and refinement of Christian Dior. 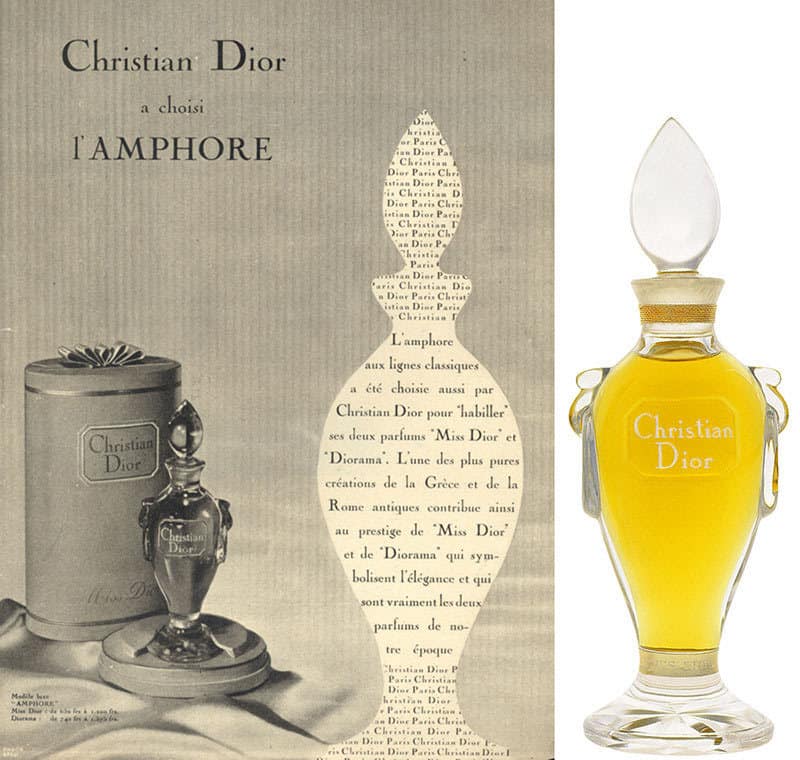 The classic Chypre structure was revisited thanks to an introduction made of Galbanum, Gardenia and Clary Sage. The magnificent floral heart translates a rich blend of Rose, Neroli and Jasmine. The olfactory structure is complete by a warm aura of oakmoss, patchouli and ciste labdanum. Created by Jean Carle and Paul Vacher, Miss Dior became a true archetype for the green chypre structure. It defined for many years the Christian Dior house and the style of Mr Christian Dior in person.
Years passed by and in 2005 Dior launches Miss Dior Chérie with the face of Riley Keough (oldest grand-daughter of Elvis Presley). The tag line was the “New look of Dior”. Obviously the idea was to capitalize in the iconic franchise by bringing a young and more suitable to market fragrance.

What we did not know is that rather than capitalizing in the Miss Dior franchise, Miss Dior Chérie phagocytes the historic fragrance. The “Chérie” word disappeared in less than 10 years and rationalization happened. 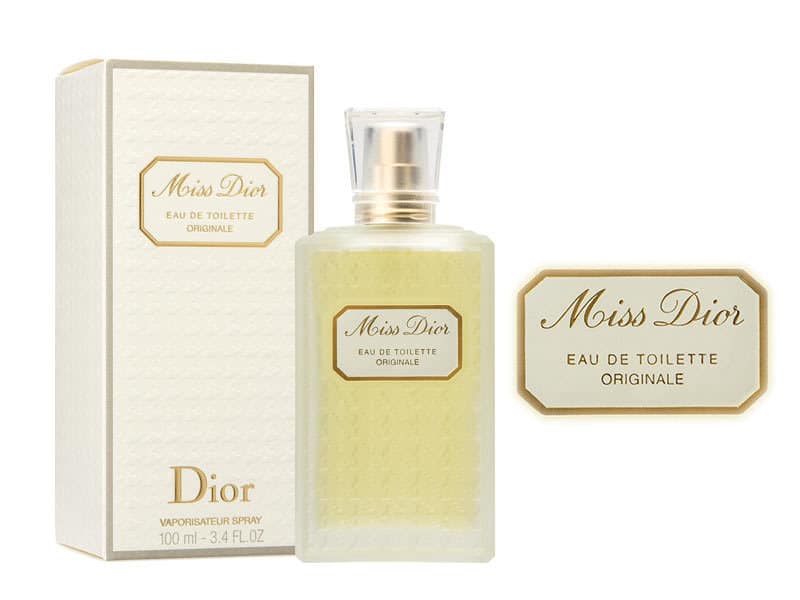 As we can see in the picture above, now the Miss Dior from 1947 is called Miss Dior Originale, so you understand which one is the first one. With this, Dior has rewritten the Miss Dior franchise allowing further commercial developments. Currently we count around 11 different references from a fragrance point of view (alcohol base) and 9 ancillary products. Also in terms of fragrances, there are now four main olfactory developments as follows:

Not sure we get any clarity in the line and erasing the “Chérie” from the 2005 launch was basically a way to reset the line now under the silhouette of Natalie Portman.

Somehow, Christian Dior is king in its kingdom, so they can do whatever they want with their own heritage. If they wish to revisit their portfolio, up to them to decide. They know best what their brand needs. Unfortunately, the revisits did not stop at the borders of the French luxury house, it went beyond, which causes some anachronisms.

In 2015, Dior presented a new ad for J’Adore in which we can see several past hollywood stars including Grace Kelly and Marilyn Monroe. Having Marilyn Monroe wearing J’Adore was pretty shocking as we know she was a Chanel N.5 addicted. This revisit of history made Chanel react  of course and Chanel displayed the beautiful and emotional interview of Marilyn where she says that she only wears Chanel N.5 in bed. This allowed Chanel to replace history where it should. Here below the sound extract 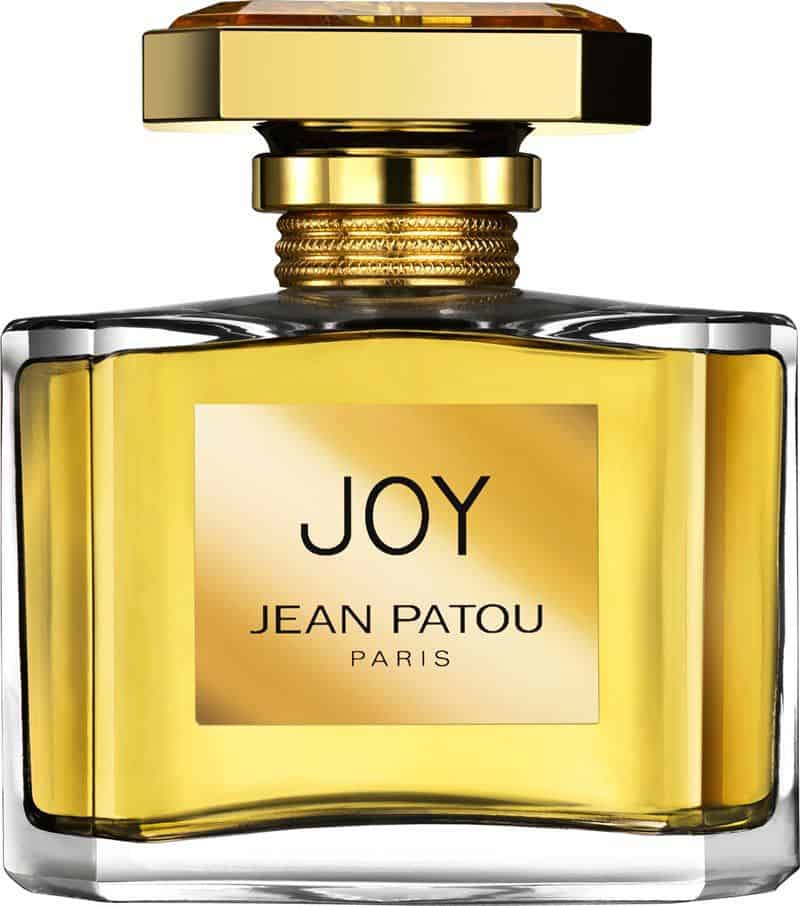 When Jean Patou launched Joy in 1930, it was not only a big statement but also a big financial risk. In 1929 it was the Wall Street melt down. Economic crisis was at its hardest and in those hard moments, Jean Patou had this great idea of launching the “Costliest perfume in the world” and it would be called Joy. Only the finest ingredients would be used in this timeless fragrance. Two main stars of the composition take the lead: Jasmin and the Centifolia Rose from Grasse (south of France). The generous usage of these two precious absolutes made this fragrance extremely costly. We tend to say that for each ounce of Joy, it is required 10’000 Jamine flowers and 28 dozens of Centifolia Roses. History says that after the in-house perfumer has created a formula containing quite a lot of magnificent natural, Jean Patou himself asked to double the dosage. With a lot of talent and mastery, Henri Alméras controlled these powerful elements to create the most exquisite fragrance of all.

Sometimes we would say that money cannot buy everything but sometimes it does. Jean Patou was a family-owned business until 2001 when Procter & Gamble purchased the business. Obviously they offered a proposal that could not be refused. We thought it was the end of the brand as marketing and distribution groups such as P&G would find hard to develop such unique brands. That’s why 10 years later, Jean Patou was again sold to Designer Parfums Ltd, a UK-based firm. We thought they would be the saviors of such outstanding heritage until they sold now the brand to LVMH. Strange coincidence this acquisition at the same time Dior is launching a fragrance called Joy.

Talking about this new launch, I must confess it is very shocking to see such a honorable luxury house going that road and rewrite history by acquiring the rights of using such an iconic name. Aren’t other names available? There are great temptations for a marketer in the perfumery business. One of them is to take different elements from different past projects, mixed them together and hope for the best.

JOY BY DIOR, THE NEW FRAGRANCE – COMING SOON The House of Dior is about to reveal its new #JoybyDior fragrance embodied by the stunning #JenniferLawrence. #TheJoyofDior #Diorparfums

In the media mix, we have Jennifer Lawrence, young sexy and talented. Nevertheless, it sounds more a marketing hit as the character is not at the same level as Charlize Theron. The fragrance flacon is taken from the Exclusives line. No creation at all for a new Dior. This is also bringing creation down. While Dior is looking for its “La-Vie-Est-Belle killer“, marketing should never overtake creation. We shall share here more elements once the launch is official, by the end of August. This news comes along with the news about the fact LVMH would have acquired Jean Patou. LVMH is close to acquiring a new perfume brand, Jean Patou, for its portfolio and has done it very much on the quiet. The announcement is not official but there are a couple of signs that do not lie. Sydney Toledo, former CEO of Christian Dior Parfums and since January CEO of LVMH Fashion group, became the new chairman of Jean Patou. Jean Patou headquarters are now listed at 24 rue Jean Goujon, also the location of LVMH Fashion group. While LVMH is taking over Jean Patou, Christian Dior is launching JOY… It reminds me when P&G launched Femme by Hugo Boss, after purchasing Rochas. 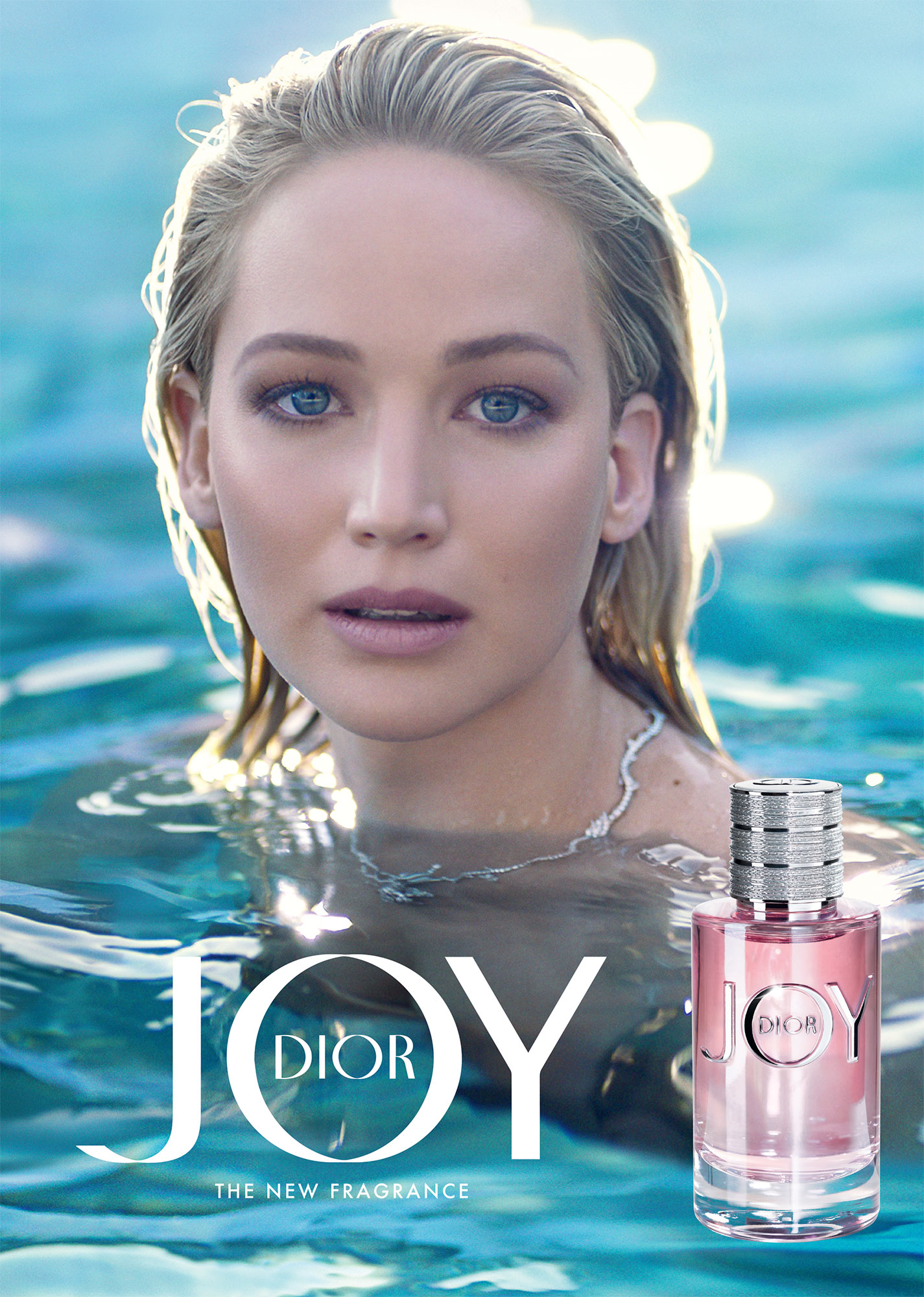 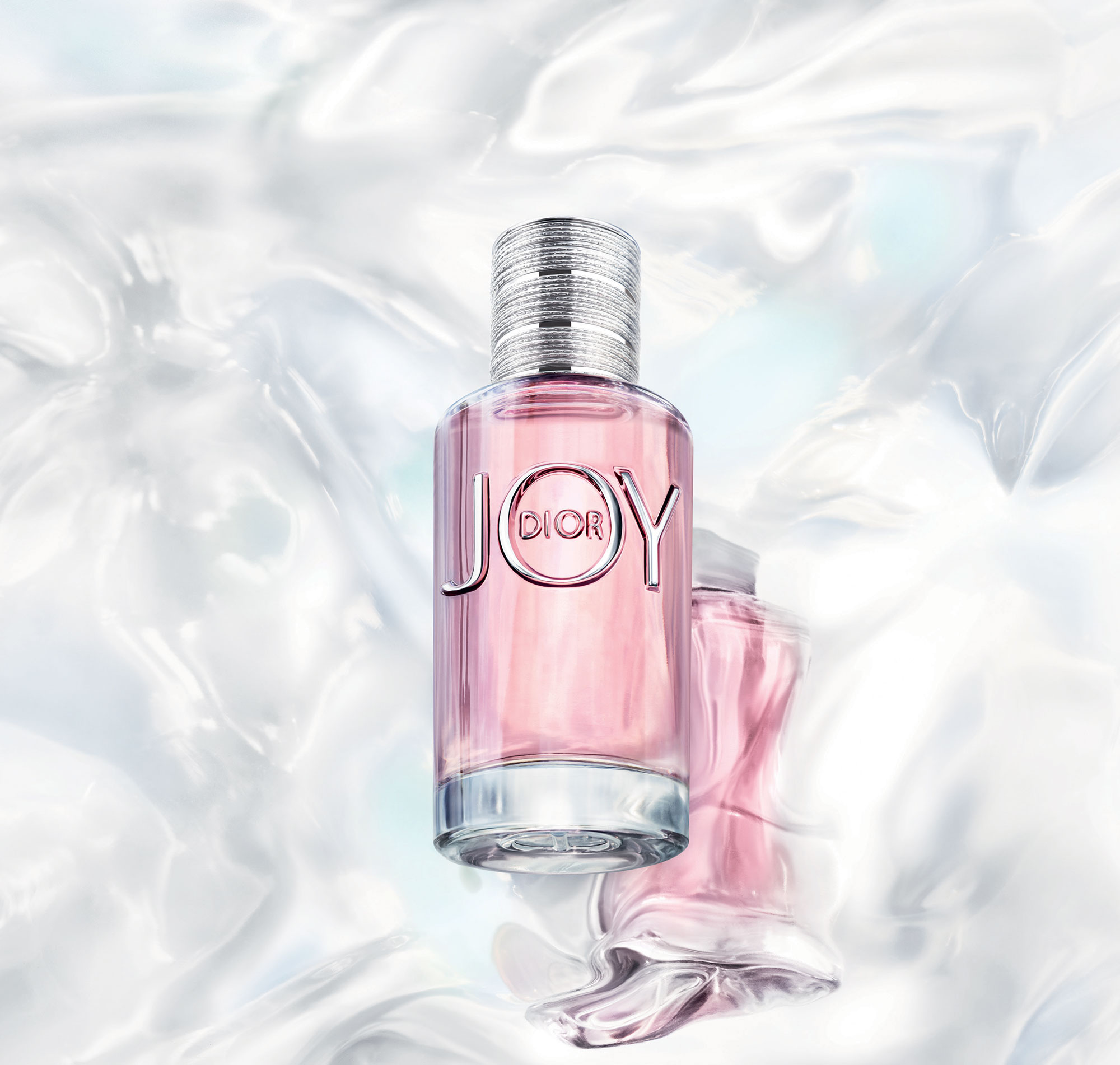 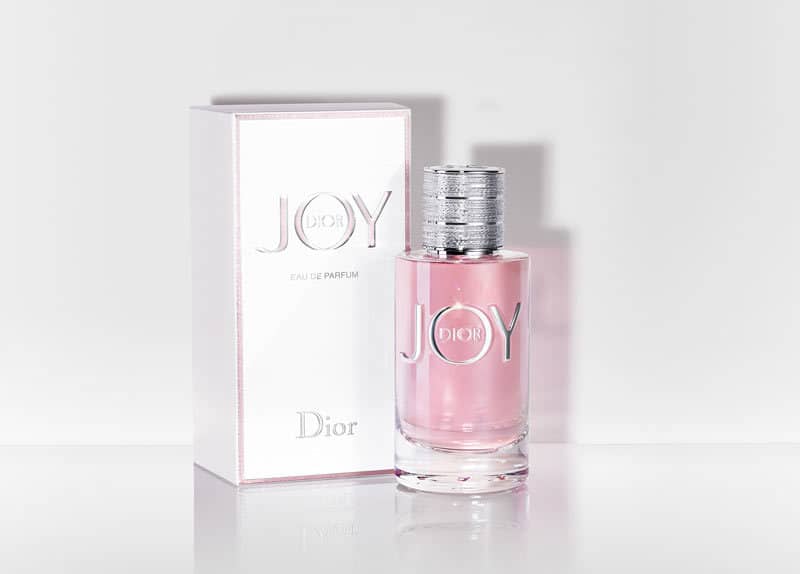 It is not only very surprising but also very disappointing to see Christian Dior Parfums acting in such way. Important brands have important responsibilities to make the industry better and level up things. By trying to re-write history, Christian Dior is not creating the future, more a half-cold present. When we know of what the fragrance and luxury house is capable of, we want to see Christian Dior on better, greater and original launches. You can read more in the brand website here: Dior.com.

End of the 90’s, An Amazing Period For Christian Dior Parfums – Creativity At Its Maximum

Christian Dior had an interesting decade from 1990 and 2000. It was a moment during which the luxury french brand was going over different reorganizations. In 1987 Moët & Chandon becomes LVMH by merging with Hennessy and Louis Vuitton. Two years later, 1989, Bernard Arnault takes over LVMH through Financière Agache. His first important decision is to gather under the umbrella of Christian Dior Holding the two main activities of the brand: The Couture and the Fragrances. In 1997, LVMH acquires SEPHORA, the perfumery distributor leader. The aim is to provide distribution power to all incoming fragrance launches of the group. The set is ready for Christian Dior to deploy the wings of creativity and strike the market with great launches.

Christian Dior launched in 1998 a true olfactory UFO, in the name of Hypnotic Poison. Building in the strong foundations of the 1985 Poison fragrance line, It was a big hit for Christian Dior. The fragrance itself was out of this world. Annick Menardo (Firmenich) created a very original distinctive fragrance still with a strong commercial appeal. It was clearly a defining moment for Annick Menardo that earned golden letters in her job as Perfumer. This fragrance follows the mythic path of Poison and is a diabolical and mysterious fragrance, a magical philter of modern times that expresses the sensuality of our era. Extravagant and intoxicating, Hypnotic Poison is the perfume of femininity and boldness. The success of Hypnotic Poison helped Christian Dior to capitalize revenue in order to prepare what was coming.

1999: A defining year for Christian Dior Parfums – The Launch of J’Adore

Capitalizing on its legacy is one thing. Creating a new heritage is something else. At the end of the 20th century, Christian Dior Parfums had a new defining moment, the launch of J’Adore Eau de Parfum. Everything in this fragrance was new and the blend was a tremendous cocktail of creativity, audacity and commercial reality. The ambition was very clear, became market leader within the year of launch. Everything was put in place to make it happen:

The perfumer behind the creation of J’Adore is Calice Becker, at that time working for Quest International (now Givaudan). It was for sure a defining moment for her as well by signing one of the biggest blockbusters of the industry. With this launch, Christian Dior revised the luxury standards of perfumery and made a great success over the years. Quickly the French brand found a new face for J’Adore with Charlize Theron, who became Madame J’Adore since then.

The creative heritage of Christian Dior Parfums always brought the brand into untapped territories allowing the brand to position themselves as true leaders and innovators. We all remember fragrances like Fahrenheit, or even the Dior Colognes… fragrances that set benchmarks in the industry and that would mark people’s mind in a positive way.

By launching such a commercial soup without any commitment to creativity, Christian Dior is letting the marketing battle to win. A fragrance should be more than just a marketing mix in which consumer testing and marketing techniques rule. I did not have the opportunity to smell the fragrance itself but I will not miss to say what I think in a next post.

Shame, Shame, Shame on you Christian Dior. Unfortunately it is not a “joyful” news.

The Perfect Holiday Season With La Prairie: Our Top 5 Must-haves!

The New Wow: The Most Beautiful Thing You Can Wear Is Actually Confidence​!

Puredistance, A True Exclusive And Luxury Fragrance House Worth Knowing.